As work continues on the Apple Park campus, new signage and invitations sent to local residents show Apple is preparing for the grand opening of the Apple Park Visitor Center on November 17th. 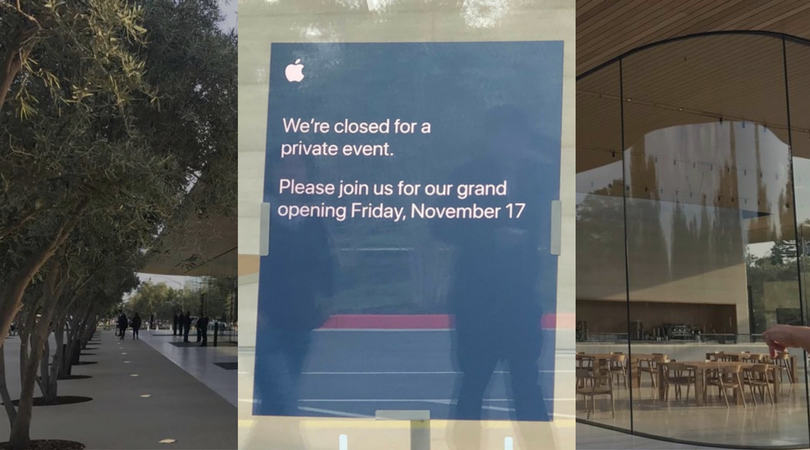 The invite sent to residents of Cupertino and neighboring areas features a simple “Hello” inscription that’s similar to the old school Macintosh days. Apple says the preview event will be open from 3PM to 8PM and that attendees must bring a photo ID that proves their residence.

Abbi Vakil tweeted a photo of the invitation:

The Visitor Center – which is estimated to have cost Apple around $109 million to build –  reportedly has a gift shop inside with Apple branded items for sale; however, it is not a full Apple Store and won’t stock items like the iPhone X. It also features a rooftop observation area overlooking the main building, a cafe, an outdoor seating area, plus an exhibit space.

Apple Park is home to several buildings, most prominently a 2.8 million square foot ring unofficially known as the Spaceship, which boasts four-story curved glass panels, custom aluminum door handles and one of the largest roof-mounted solar farms in the world. It’s the new home for more than 12,000 Apple employees, a sizable chunk of Apple’s Cupertino, California, workforce.

YouTube is catching up to Twitch and is now offering support for YouTube Emotes. These custom images can be used across the platform while interacting with chat and the comments in a video. Currently, YouTube is supporting a variety of Gaming Emote. In a YouTube Help blog post, a community manager highlights the fact that...
Steve Vegvari
31 mins ago