Apple continues its foray into iDevice security with a new patent for “Generating notifications based on user behaviour” (via AppleInsider). You may recall that another usage-pattern-based patent took advantage of the user’s location to apply different layers of security. Today’s patent is also based on usage habits, as it describes an iPhone or other mobile product that employs behaviour recognition techniques to determine whether the current user is the device owner or not. And in case it detects that it isn’t, the system triggers an alert, notification, or system action.

According to the patent description, the mobile device will start learning the device owner’s habits in order to be able to identify unusual behaviour. This implies data input like location, motion sensor data, and gesture patterns. The pattern learning server will even go as far as storing data like grammar, vocabulary, and even keyboard orientation preferences for later recall and analysis. (This makes a great case in court for privacy advocates, I think). 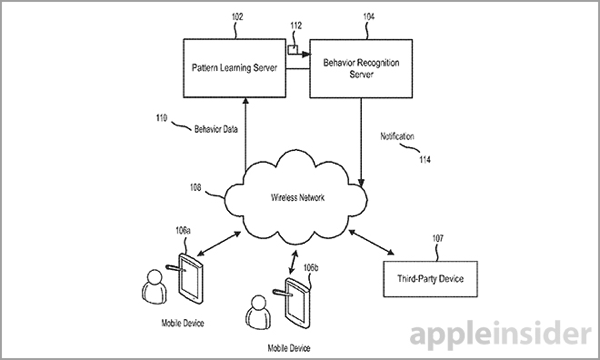 So, in the end, as Apple learns the user’s behaviour, it constantly compares it to the historical data, which is obviously associated with the device owner. The more you use it, the more it will learn about you.

Apple’s invention constantly monitors user behavior, comparing it to historical data known to be associated with a device owner. For example, an iPhone’s accelerometer generates data about a user’s gait, then compares that information with data stored either onboard or on a remote server. Analysis may also take place offsite on a pattern learning server.

[…] Due to the privacy concerns, the behavior learning server can be programmed by the user to ignore certain types of behavior like location preferences. In these cases, generalizations and relative positioning replace granular data, protecting individuals from intrusive analysis.

The direct result of the learning period is the following scenario: If the recognition server detects unusual behaviour, it may transmit a signal to remotely lock the device until the device owner (or user) identifies him/herself as a trusted user using a password or Touch ID. In addition, the server can send out a notification to another device owned by someone else.

Apple patents lots of thing, and not all patented technology makes its way to Apple’s devices. Would you like to see this feature on your iPhone or preserve your privacy instead?