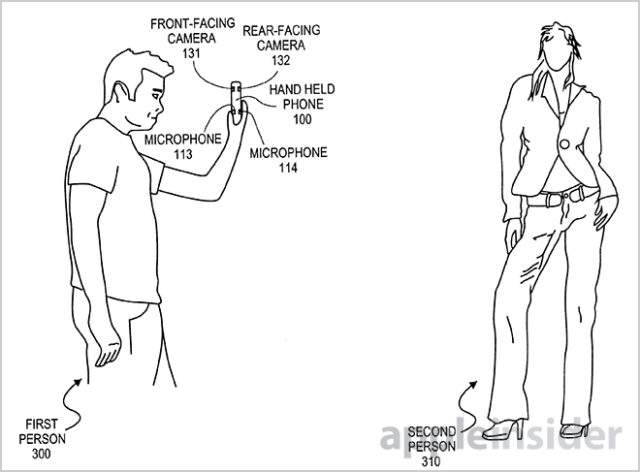 A newly published patent reveals that Apple is working to automate the video stream selection in its popular FaceTime application (via AppleInsider). The enhanced system would record video from both cameras simultaneously, and uses voice of visual clues to determine which one to stream.

As the US patent for “Automatic video stream selection” description states, the current setup of iPhones allows the handset to use only one camera at a time while using FaceTime, and users can switch between the cameras as desired.

To address this limitation, Apple proposes a system that captures two video streams for voice or visual cues, and streams one based on predetermined criteria, such as speech detection using the microphones facing the same direction as the camera and lip movements.

The patent describes several modes of implementation, which include “report mode”, in which the system captures video using the rear camera and switches to the front camera when the subject begins speaking. Another implementation could be “interview mode”, in which the handset is located between to people, and the video switches between cameras depending on who is talking.

An interesting addition described in the patent is that the system would allow a user without cellular access to store the content and then upload it when the handset detects a Wi-Fi connection.

The patent application was first filed in May, and credits Jae Han Lee and E-Cheng Chang as inventors.

Amazon announced today it will stream 25 James Bond films on Prime Video beginning on October 5, 2022. According to the company, these 25 Bond films set to stream in Canada, the U.S., UK and other key territories is part of the 60th anniversary celebration of the iconic film franchise. Also coming is The Sound […]
Gary Ng
3 mins ago