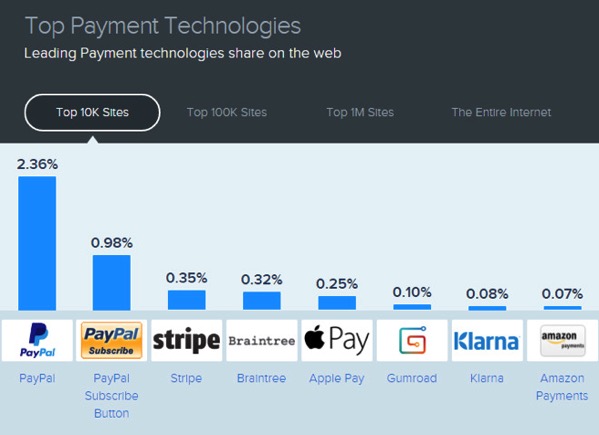 Currently supported on a total of 1,035 websites, Apple Pay reached the web only a couple of months back with the public release of iOS 10 and macOS Sierra and already, it is one of the most common payment platform on most popular websites. According to new analytics data by SimilarTech, Apple Pay now ranks fifth in marketshare of the Web payments industry, with 0.25% share of the top 10,000 websites (via AppleInsider).

Within those 10,000 sites, Apple is ahead of companies like Amazon and Google, but still well behind industry leader PayPal, which controls the top two spots —one with its standard payment services (2.36 percent) and the other via the PayPal “Subscribe” button (0.98 percent). Stripe and Braintree round out the top five.

The same rankings continue to play out when expanding the view to the top 100,000 websites, even though Apple’s share shrinks to just 0.11 percent. Among all websites, Apple is in just 27th place.

According to SimilarTech’s marketing director Daniel Buchuk, Apple has seen a “meteoric rise” given the difficulty of getting sites to adopt payment platforms and the years its competitors have had to establish themselves. And with the release of the new MacBook Pros with built-in Touch ID, the company is expected to continue expanding Apple Pay’s footprint.

In case you missed it, the Lululemon iOS app is advertising a deal where users checking out with Apple Pay can get a free $25 gift. Check it out.