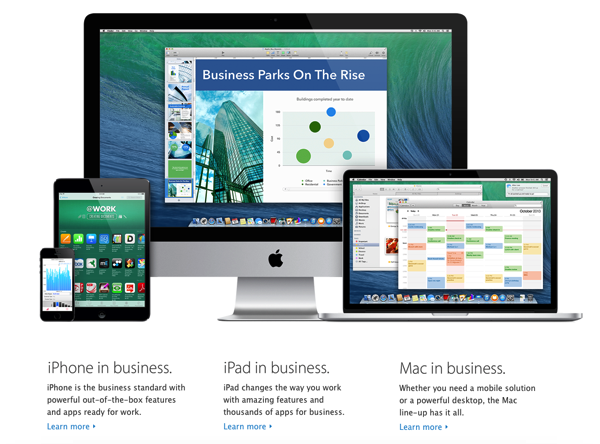 The iPhone halo isn’t limited to consumers only – it also paves the way to successful penetration in the lucrative corporate market, reports the Wall Street Journal. To put that into numbers, Apple products accounted for 8% of global business and government spending on computers and tablets in 2012, up 1% compared to 2009, and that figure is projected to grow to 11% by 2015, according to Forester Research.

As Chip Pearson, chief executive of a company that helps businesses deploy Apple products, puts it, the iPhone is the “tip of the spear”. For example, at Cisco Systems Inc. Apple has been going mainstream since the company adopted a BYOD (bring your own device) policy: iPhones now account for about three-quarters of Cisco’s 70,000 mobile devices. Furthermore, the number of MacBooks is also on the rise: about a quarter of the company-provided laptops – roughly 35,000 – are Apple portables.

LG&E and KU Energy LLC, Kentucky’s biggest electric utility, shows how Apple gains a foothold inside companies, and then expands its reach.

The utility, a subsidiary of PPL Corp. PPL +1.28% , approved the iPhone for employees in 2010. It then introduced iPads, and built apps such as one to help its helicopter patrollers survey 5,500 miles of high-voltage power lines. Using an iPad’s global-positioning system, patrollers can pinpoint the location of a problem and select from a menu of common issues, such as a damaged pole or an overgrown tree.

“For years, we looked for some way to automate this and we heard all sorts of fairy tales, but we could never find anything,” said Robby Trimble, LG&E and KU’s manager of transmission-line services.

Also, there are the apps: just like Cisco, other companies have developed apps, with iDevices being the first choice of companies for such mobile applications.

Traditional makers of business software are making versions of their products for phones and tablets. Salesforce.com Inc., which offers its software to manage customer relationships over the Internet, says most of its apps are being downloaded to Apple devices.

Apple has historically focused mainly on consumers rather than corporations, but as the WSJ points out, under Tim Cook this has changed: the latest built-in features in both the mobile operating system and iOS make it easier to link portables to corporate email systems, and they also provide better data protection.