Apple is projected to become the world’s top smartwatch vendor, with 15 million units shipped in calendar 2015, according to recent Strategy Analytics research. The projected unit sales are way below the 40+ million some analysts have been dreaming of, but above Gene Munster’s “skeptical” forecast, which projects 8 million units for this year. However, we don’t know what product replacement cycle plans Apple has for its wearable.

Looking back to last year, we find that OEMs shipped a total of 4.6 million smart wearable bands, says Canalys. The leader, apparently, was Pebble, with 1 million units from its 2013 launch through to the end of 2014. More than 720,000 Android Wearable devices shipped in calendar 2014, the same Canalys has found. 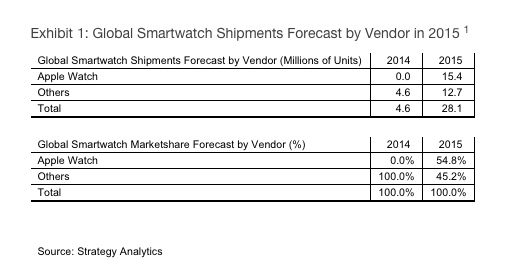 “The Apple Watch is the catalyst to ignite the global smartwatch market, Neil Mawston, Executive Director at Strategy Analytics said. Apple’s famous brand, loyal fan base, deep retail presence and extensive apps ecosystem will ensure healthy uptake for its Watch. However, Apple’s first-generation Watch is not yet perfect. For example, Apple’s Watch hardware design is arguably less attractive than some rival models such as the Huawei Watch, battery life may not be as long as many traditional wristwatch owners are used to, and Apple’s premium pricing may be challenging for mass-market consumers. Apple will need to upgrade tangibly its second-generation Watch to stay ahead of competitors later this year.”

Looking forward, Strategy Analytics projects a total of 28 million smart wearable band shipments for 2015. the Apple Watch is expected to take 55%, with 15.4 million units, while other vendors will ship the remaining 12.7 million units, the market research firm says.

All eyes are on Apple now: The company is expected to reignite the smart wearables industry. This year alone, the wearables market is expected to grow by 511%, from 4.6 million to 28.1 million units.