Apple Ranked As Top Smartphone Manufacturer in US [Report]

Apple’s iPhone is the choice of 39.2% of Americans, making the Cupertino, California company the top smartphone manufacturer in the US, according to comScore’s most recent MobiLens report. The report covers key trends in the US smartphone market over a three-month period ending in April, 2013.

Despite the popularity of Android phones, 1.4% more of the 138.5 million U.S. smartphone users have chosen iPhone. Samsung has recorded a 0.6% growth during the past three months according to the comScore report. 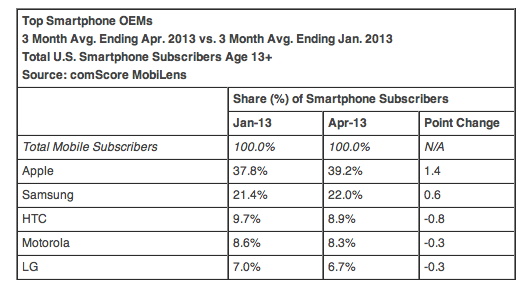 The South Korean manufacturer is still well behind Apple. It is the choice of about 22% of the American smartphone users. Smartphone penetration stands at 58%, with HTC, Motorola and LG losing popularity. 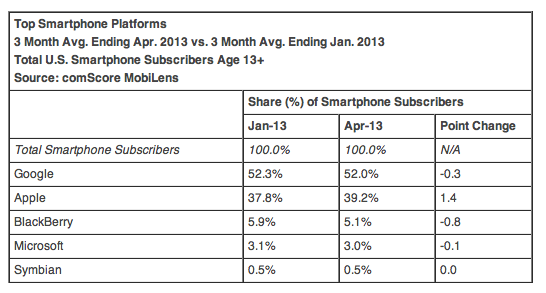 However, Android’s presence in the US smartphone market is strong and it controls 52% of the market, down 0.3%, while Apple ranks second with 39.2% on the top smartphone platforms list compiled by comScore.

BlackBerry is down 0.8% and currently stands at 5.1%. Microsoft has managed to lose 0.1% of its market share which in April stood at 3%.