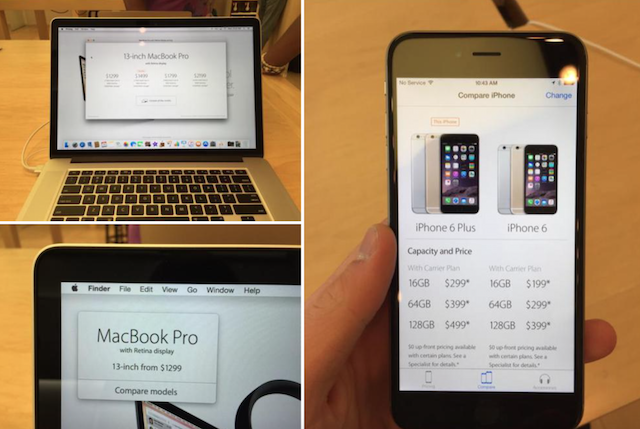 Apple retail store Smart Signs i.e tethered iPads which displayed product specifications and pricing information next to the demo units at retail stores, have now been replaced by a new app called ‘Pricing’, which has been installed on all demo MacBooks, iPads and iPhones on display at Apple Stores, as pointed out by 9to5Mac.

“Apple has now ditched the Smart Signs in Apple Stores with a new app called ‘Pricing’ on demo MacBooks, iPads and iPhones which contains the same information.

The app lets users compare models, check accessories and review product specs related to the current product they are using. On the Mac, the Pricing app also adds a floating window to the OS X desktop which invites customers to click to ‘compare models’ and find out more information. You can also call over an Apple employee for personal assistance from within the UI”.

The Pricing app’s icon looks like an Apple Store employee badge as shown above. However, just like the custom Touch ID app, the Pricing app is exclusively meant to help users in store learn more about the products on offer, and is not expected to appear outside the Apple Store.