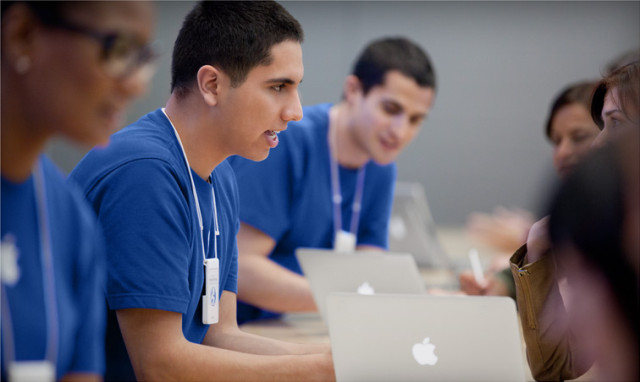 According to a new report from MacRumors, Apple will be replacing its Cupertino campus training sessions for new Apple retail store ‘Geniuses’ with in-store, self-guided training.

Web-based seminars will be replacing hands-on, guided training. This suggests that new employees may have far less real work and training experience than their predecessors.

Traditionally, Apple has invited newly hired Apple store Geniuses to its Cupertino headquarters, where its mock Genius Bar featured test Macs for them to practice standard repairs on. Considered a life-changing experience by many who were able to partake in it, the training trip was considered somewhat of a rite of passage for new hires.

Although not confirmed by Apple, sources close to the matter cited by MacRumors say that all training for new Genius Bar employees in the future will be handled in-store.

The concern, among the source and analysts, is that this could result in Apple products being repaired by people who have never actually opened up a Mac before.

However, there is one caveat to this story. Apple may only be temporarily suspending in-person training at their HQ until the ‘spaceship’ campus is ready.

As part of its continuing production diversification initiative, Apple has ordered for a portion of its AirPods and Beats headphones to be manufactured in India. Apple has begun to double down on manufacturing its devices in India. As a way to lower its dependence on China, Apple has made an order to its suppliers to...
Steve Vegvari
52 seconds ago