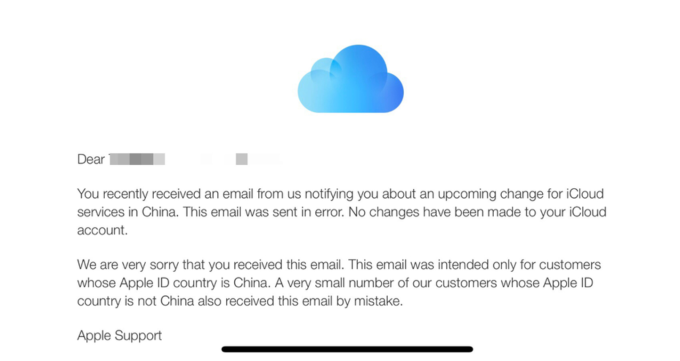 Earlier this week, Apple notified some users living in China that their data would be moved to Chinese servers to comply with local laws. However, there was some confusion as a number of users outside of China also received the same notice.

On Friday, Apple clarified the situation saying that only users who live in China, or users who set their Apple ID country to China, will have their iCloud data migrated. The data will be moved to servers that are operated by Guizhou-Cloud Big Data Industry.

You recently received an email from us notifying you about an upcoming change for iCloud services in China. This email was sent in error. No changes have been made to your iCloud account.

On Wednesday, Apple told Chinese Apple ID holders that it will pass control of its iCloud services to GCBD in late February. TechCrunch later discovered a number of U.S. iCloud users received the email meant for Chinese customers.

The data migration by other companies has raised concerns among privacy advocates. However, Apple claims that its partnership with GCBD grants customers strong data privacy and security protection. The company also promised that no backdoors will be created by government agencies or other entities.