When Apple’s iPhone 3GS went on sale worldwide on June 19th, 2009, nobody could possibly predict how many iPhones would be sold. Well, Apple released a press release today to indicate they have sold 1 million iPhone 3GS units in 3 days!

For comparisons sake, take a look at some of these staggering numbers:

Nobody expected the iPhone to explode like this, but it definitely has changed the mobile landscape and has other companies trying to play catch up. I’m sure one day there will be an actual iPhone contender, but right now Apple seems to do no wrong. 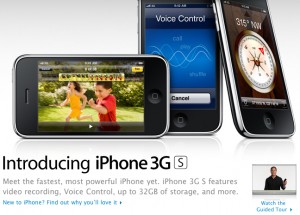 I guess you could count me in as 1 iPhone 3GS out of that 1 million sold!

On Monday, Bell Media announced veteran CTV news anchor, Lisa LaFlamme was being let go by the company. Coinciding with Bell’s announcement, LaFlamme broke her silence in a final “sign off” on Twitter, a video that has since racked up 3.8 million views. Her firing has made international headlines in the past 24 hours. LaFlamme,...
Gary Ng
7 hours ago

According to a CTV News report, a coalition of Chambers of Commerce representing border communities is calling on the federal government to scrap the ArriveCan app requirements for travelers crossing the border. A Statistics Canada report shows U.S. visits through land ports are still down significantly across the country. The border-city mayors are therefore also asking...
Usman Qureshi
7 hours ago