Apple’s strategy of premium products is working just fine: The company captured a record-high 89% share of smartphone profits during the fourth quarter of 2014, according to a report issued by Strategy Analytics.

The market research firm has published a breakdown of industry profits by operating system. The global smartphone operating profit hit the $21 billion mark in the holiday quarter, rising 31% annually, from $16.2 billion in Q4 of 2013. 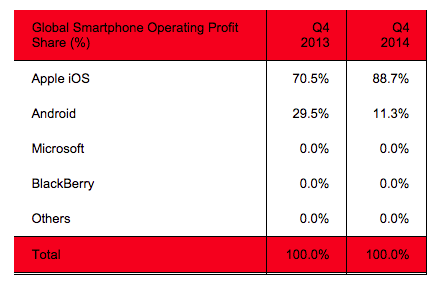 One thing, however, hasn’t changed: The majority of smartphone profits went to Apple. You may recall that the company reported the sale of 74.5 million iPhone units, and made $34 billion in the last quarter alone.

Apple iOS continues to tighten its grip on the smartphone industry. Apple’s strategy of premium products and lean logistics is proving hugely profitable. Android’s weak profitability for its hardware partners will worry Google. If major smartphone manufacturers, like Samsung or Huawei, cannot make decent profits from the Android ecosystem, they may be tempted in the future to look at alternative platforms such as Microsoft, Tizen or Firefox.

Neither Microsoft nor BlackBerry made any profits on the smartphone manufacturing arm of their businesses, according to the market research firm. This shouldn’t come as news, since they didn’t make a profit a year earlier either.