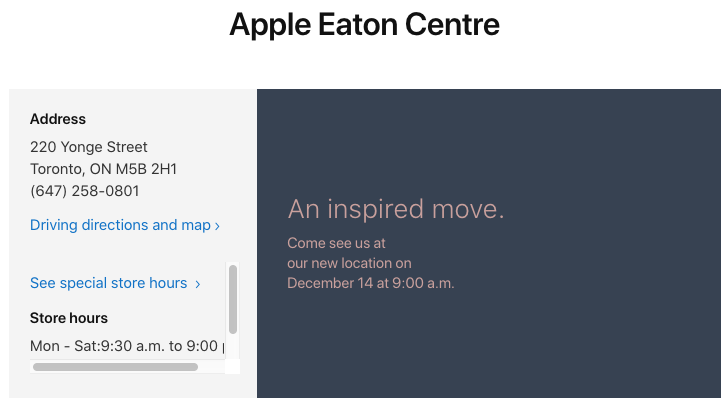 Last month it was reported the new Apple Store at the Eaton Centre in downtown Toronto was apparently scheduled to open in December, according to MacRumors.

Now, Apple Canada’s website has confirmed a grand opening for this new store, set for Saturday, December 14, at 9AM.

“An inspired move. Come see us at our new location on December 14 at 9:00 a.m.,” explains Apple, referring to the store’s new location, which moved from the second level to the ground floor, more than doubling its footprint to over 10,000 square feet.

The new store is said to have the newest features from a modern Apple Store, such as a Forum Display video wall, cube seating and more to support Today at Apple sessions.

The current storefront says “We’ve got something special in store for you,” adding, “A brand new Apple Store is coming December 14.”

Other Apple Stores in Toronto include locations at Yorkdale, Sherway Gardens, and Fairview.