The Epic Games account in the App Store has been terminated by Apple. This means you can no longer download any games from the developer, even through your previously purchased tab in the App Store.

Apple had previously noted August 28 as the date it would end the Epic Games developer account, giving the company 14 days to comply with developer guidelines. Fortnite was pulled from the App Store after Epic Games implemented their own payment system, bypassing Apple and the latter’s 30% cut.

By noon PDT on Friday, the Epic Games account was gone from the App Store, as spotted by MacStories’ John Voorhees.

Apple provided the following statement to the media in regards to the move (via 9to5Mac), saying they were “disappointed” they had to shut down the Epic Games account:

We are disappointed that we have had to terminate the Epic Games account on the App Store. We have worked with the team at Epic Games for many years on their launches and releases. The court recommended that Epic comply with the App Store guidelines while their case moves forward, guidelines they’ve followed for the past decade until they created this situation. Epic has refused. Instead they repeatedly submit Fortnite updates designed to violate the guidelines of the App Store. This is not fair to all other developers on the App Store and is putting customers in the middle of their fight. We hope that we can work together again in the future, but unfortunately that is not possible today. 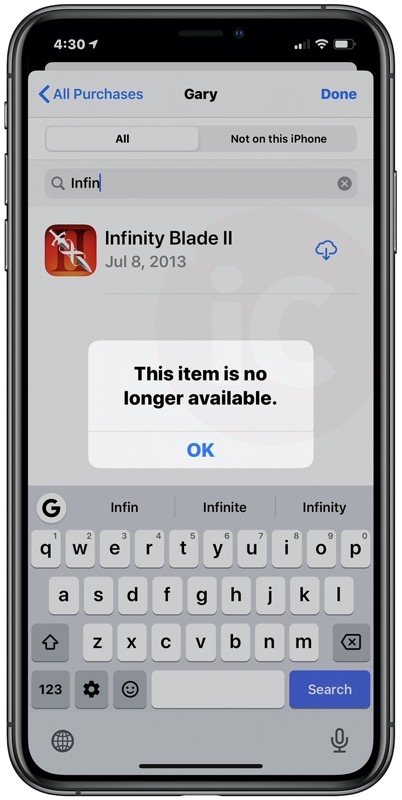 As you can see in our screenshot above, trying to download a previously purchased game from Epic Games in the App Store results in the error “this item is no longer available.”

The recent update to Fortnite was blocked from iOS and Mac devices yesterday. Apple has since started promoting PUBG Mobile instead in the App Store.

Apple and Epic Games will see their first hearing in court near the end of September, where the latter will seek a preliminary injunction to bring Fortnite back to the App Store.