Apple Threatens to Pull Out of Massive Toronto Condo Project 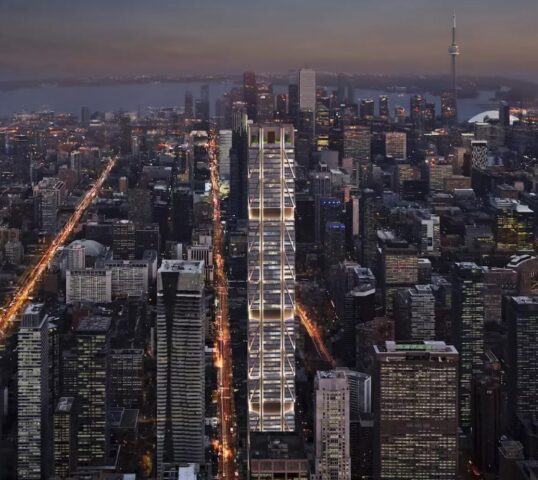 Apple is threatening to pull out of a massive Toronto condo project, expected to be the tallest residential tower in Canada.

Over the past years, the 85-story skyscraper at Yonge and Bloor streets called The One has been under construction, with the final building set to host a unique space designed to host Apple’s flagship store, complete with an arresting glass architecture and soaring ceiling.

Now, however, the Cupertino company has reportedly told the developer Sam Mizrahi that it may pull out of the downtown building, due to missed deadlines.

According to The Globe and Mail, Apple has told Mizrahi Developments that it may exercise an option in its contract that would allow it to exit without penalties. The option comes into force if the project misses certain deadlines. The project has been slow-going due to COVID-19 and a plumber’s strike in 2019, says Mizrahi.

“[The One will] suffer irreparable harm from losing a world-class tenant that was intended to be an anchor tenant for a world-class property,” says the developer in court documents seen by the publication, “which is a loss that cannot be compensated in damages.”

The lease was for over 15,000 square feet, which included in excess of 9,000 square feet for retail on the project’s ground floor. Mizrahi Developments agreed to pay Apple’s design costs, estimated to be $6.24 million CAD, as part of the contract.

The planned retail space, designed by longtime Apple architects Forster & Partners, would feature seven layers of glass with no breaks, built from 34 custom-fabricated panels that cost over $400,000 CAD each.

Mizrahi says Apple’s “position flies in the face of the commercial and practical realities of the construction process for a project,” detailed court documents.