If you’re on the hunt for an Apple TV deal for Christmas, start lining up at your local Staples as tomorrow they’ll have a one-day door crasher sale on Dec. 14, priced at $88 ($21 off; minimum 8 per store), according to RedFlagDeals: 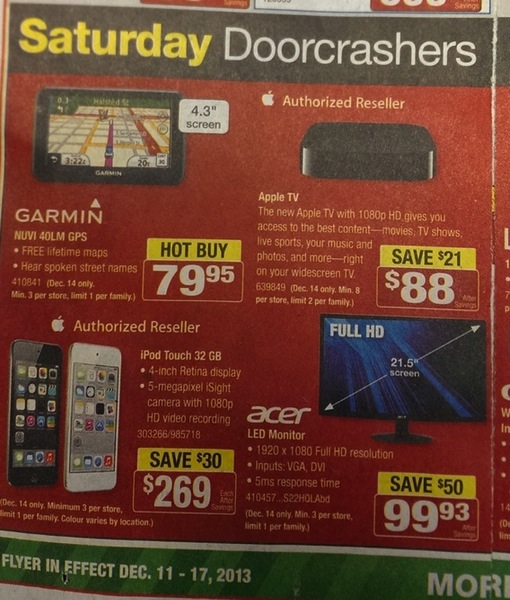 Sure, a refurbished Apple TV costs $85 from Apple, but for $3 more you can get one brand new and right away in-store. You could also try price matching this at Future Shop or Best Buy.

Last year, Staples had a similar Apple TV door crasher priced at $79 both online and in-store, but that ended up being one giant SNAFU as they got overwhelmed with online orders and cancelled most of them, which made a lot of people angry.

Other sales in the flyer note the 13-inch MacBook Air is $150 off, and iPads get bonus Air Miles.

Let us know if you’re going to try to nab one of these Apple TVs tomorrow!

Update: this sale is available online too.

Fresh off the heels of the launch of Apple's HomePod (2nd-Gen), TF International Securities' Apple analyst Ming-Chi Kuo believes a successor to the HomePod mini 2 could be on its way. In a tweet thread surrounding Apple supplier Goertek, Kuo discussed that the Weifang-based components company has "secured NPI and assembly orders" for the ‌HomePod mini‌...
Steve Vegvari
29 mins ago