Apple has been rumoured to have been working on a Pandora-like music streaming service for quite some time now, with the rumour mill gaining traction this year. According to earlier reports, the service was supposed to arrive much earlier, but has faced several roadblocks. Today Apple introduced its music streaming service called iTunes Radio.

The service  was dubbed “iRadio”, so Apple surprised us by naming it iTunes Radio. The music streaming service demoed by Eddy Cue is built into iOS 7, works on iPhone, iPad, iPod Touch, Mac and AppleTV, and it is free for all users. The service will rely on advertising support through Apple’s iAd team to generate revenue. However, if you subscribe to iTunes Match, you will have no ads.

With iTunes Radio, you can play the music you love, by your own rules. Apple now allows users to customize stations based on what you want to listen to. As soon as you pick up an artist, song or genre, iTunes Radio will build a station around it.

And while listening, you can make adjustments by tapping Play More Like This or Never Play This Song. You can even control the balance between playing the hits and discovering new songs. To add or delete stations, just go to Edit Stations. That’s also where you can select artists, songs, and genres you want to hear more of or none of, the iTunes Radio preview informs.

Siri is here to help as well: while driving users can ask Siri to play a song, and then ask her to “play more like this”. You can even get information about the artist by asking “Who sings this?”. 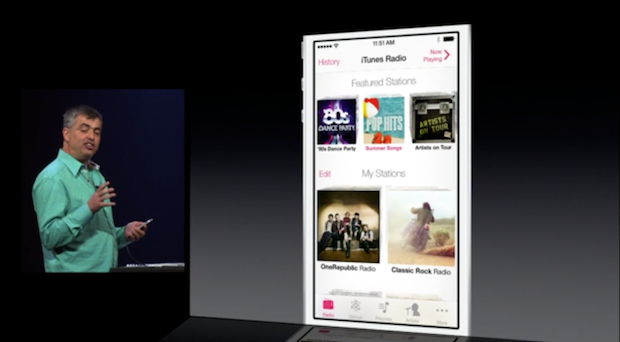 After long months of effort creating new service agreements from scratch instead of using an already established scenario, Apple has signed a streaming agreement with three major labels, Sony being the last one to happily say “YES” last week.

iTunes Radio is starting in U.S., with Apple adding more countries over time.