Despite record holiday-quarter sales, Apple’s market share dropped by 0.7% in the US, while the iPhone maintained its top position as the most sought-after smartphone, according to the latest data from comScore. As of Q4 2015, Apple’s US market share stands at 42.9%. 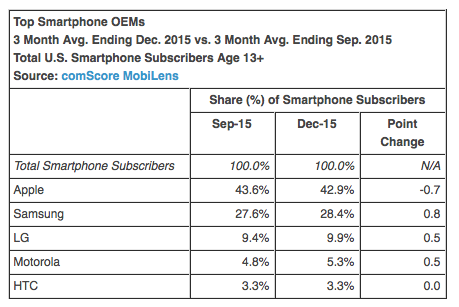 There are 197.4 million people in the US who own a smartphone, which represents a mobile market penetration of 79.3%. Apple’s iPhone remained the top choice of smartphone buyers, while Samsung ranked second with 28.4%, up 0.8% compared to the three months that ended in September. Samsung was followed by LG with 9.9%, Motorola with 5.3%, and HTC with 3.3%.

When it comes to smartphone OS, Android continues to lead over iOS with 53.3% of market share, up 1% quarter over quarter, while Microsoft maintained the same 2.9% share, followed by BlackBerry, which continues to lose market share as it transitions toward Android. 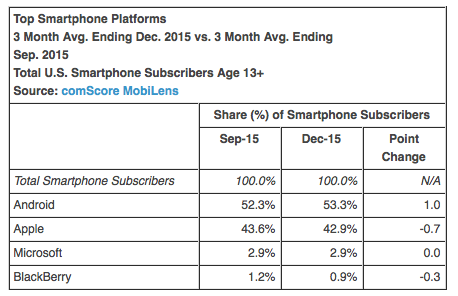