The Apple Watch diagnostic port — hidden inside of the band’s port on the bottom of the wearable — is a gold mine for accessory makers, Reserve Strap developers suggest. Lane Musgrave and John Arrow, the guys behind Reserve Strap have originally envisioned a third-party strap that will charge the Apple Watch while wearing it. It looks like they have nailed it. 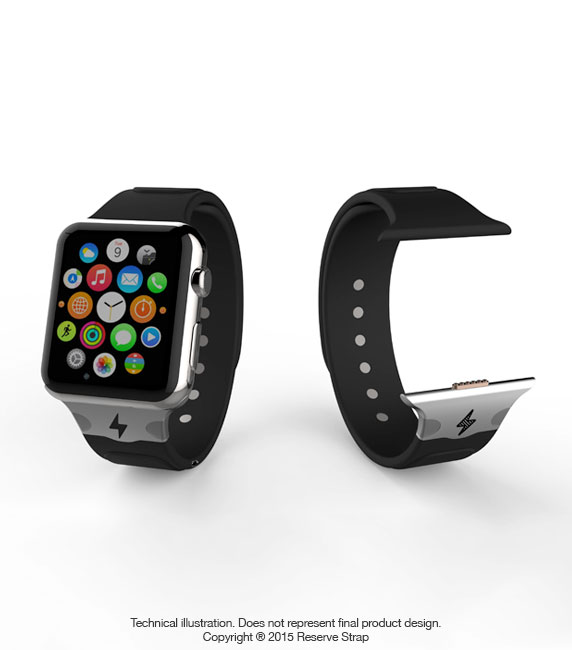 The guys behind Reserve Strap have published a rendering of the strap ahead of the official Apple Watch launch, as rumours of the device’s one-day battery life have been apparently confirmed by multiple sources. So they have come up with a fix, but it worked only in theory.

We’ve developed and tested a completely rethought design that takes advantage of the 6-pin port underneath the band slide of the Apple Watch. This port hadn’t been deciphered by anyone until now but we’ve been able to make significant enough observations so far to warrant shifting our development focus to this new method. We’re looking forward to sharing more design details and technical specification of this new Reserve Strap as soon as we can.

Reserve Strap will be available sometime this fall for both 38mm and 42 mm cases. Lane Musgrave and John Arrow have decided to fund the launch entirely on their own, and those interested in the accessory can pre-order it for USD $249. The first batch will be exclusive to pre-order customers.