Apple is readying the launch of the much-anticipated Apple Watch, so now is obviously the best time for analysts to take their best shots at predicting the number of units the company will sell this year. Fortune’s Philip Elmer-DeWitt surveyed 18 analysts to find out which direction they have taken to adjust their previous forecasts.

DeWitt first surveyed analysts after the Apple Watch–iPhone 6 event in September. Back then, the average was 22.6 million, although it included a bull case scenario of 60 million Apple Watch units by Katy Huberty.

A lot has happened since then: we’ve learned a couple of new things about the Apple Watch, but more importantly, the tension has gotten higher as we approach April, the month when the wearable will be available internationally.

Analysts have made slight changes to their sales forecasts, but the average remains nearly the same — and this time, Katy Huberty’s 60 million bull case scenario is not included on the list. Instead, there are two very positive analysts — Trip Chowdry of Global Equities Research and Robert Paul Leitao of The Braeburn Group — who set the bar high: at 41 million and 40 million units, respectively.

Katy Huberty cut her prediction in half to 30 million units. In light of the above predictions, Gene Munster’s 8 million units sound like a skeptical approach. 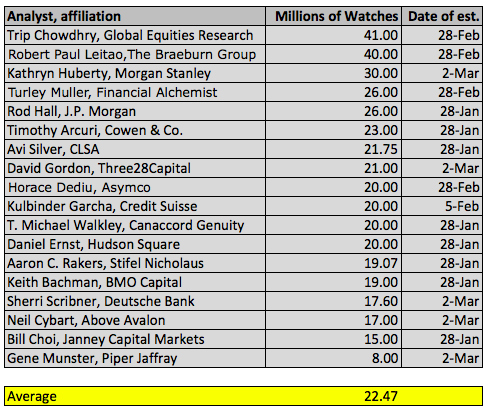 Apple will reveal further details about the Apple Watch at a media event scheduled for March 9, 2014.