Apple and Harvard on Tuesday released a preliminary study update on the Apple Women’s Health Study, offering insights on women and their menstrual symptoms. 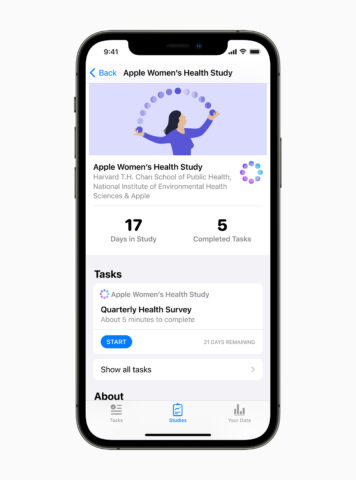 According to a new press release, the study could help advance the science around women’s health and help destigmatize menstruation, according to researchers at the Harvard T.H. Chan School of Public Health:

The Apple Women’s Health Study team at Harvard T.H. Chan School of Public Health today released a preliminary study update, offering pioneering scientific insights on women and their menstrual symptoms, made possible through the innovative research methodology of the Research app. The update, based on a cohort of 10,000 participants and inclusive of varying ages and races across the US, highlights how large-scale, longitudinal research on menstruation can help advance the science around women’s health and destigmatize menstruation.

The report notes how the topic is “notably under-researched”, and that without substantial scientific data “women’s menstrual symptoms have historically lent themselves to dismissal, or have even been minimized as overreaction or oversensitivity.”

The study, which involves women across the US, is made up of various data points including cycle tracking. Apple says that many of the participants recorded similar symptoms.

Of the participants who logged menstrual cycle symptoms, 60% reported abdominal cramps, bloating and tiredness, according to the release. More than half reported acne and headaches, while some less widely recognized symptoms, like diarrhea and sleep changes, were tracked by 37% of participants. Initial analysis suggests these symptom trends “hold true across a wide range of demographics, including age, race, and geographic location,” according to the researchers.

“Our study will help to achieve a more gender equal future, in which all people with menstrual cycles have access to the health services and menstrual products needed to feel safe and empowered,” said Dr. Michelle Williams, Dean of the Faculty at Harvard Chan School. “By building a robust generalizable knowledge base, the Apple Women’s Health Study is helping us understand factors that make menstruation difficult and isolating for some people, in addition to elevating awareness of a monthly experience shared by women around the world.”

“These findings take us a step further in validating and destigmatizing period symptoms,” said Dr. Sumbul Desai, Apple’s vice president of Health. “Harvard Chan researchers are leaders in the field on this critically important subject, and we couldn’t be more proud to support and help scale their efforts through the Research app.”

This data is important not only because learning about how common period symptoms are helps lessen stigma around them, but also because women are often excluded from scientific studies, often because of fears menstrual cycles will somehow warp the results. As a result, many women’s health issues end up misdiagnosed or simply poorly understood. The Apple study aims to change that, and to combat some stigmas around periods in the process.

“The preliminary data we are sharing today suggests women across the country have a shared experience of a wide range of menstrual symptoms, and that this natural monthly occurrence is something we should be having more discussions about,” said Dr. Shruthi Mahalingaiah, one of the study’s principal investigators and an assistant professor of environmental, reproductive, and women’s health at the Harvard Chan School. “We look forward to continuing our work to create a long-term, foundational data set over time, which can inspire more research going forward.”