Our investments are paying off. We’ve already achieved 100 percent renewable energy at all of our data centers, at our facilities in Austin, Elk Grove, Cork, and Munich, and at our Infinite Loop campus in Cupertino. And for all of Apple’s corporate facilities worldwide, we’re at 75 percent, and we expect that number to grow as the amount of renewable energy available to us increases. We won’t stop working until we achieve 100 percent throughout Apple.

Speaking with AllThingsD, Scott Brodrick, senior director of product marketing at Apple spoke about the renewable energy initiatives at their Maiden data centre:

“One hundred percent of the energy needs at Maiden are renewable,”

“We switched over these energy sources in December, and we’re committed to generating over 60 percent of the energy needs at that facility onsite using renewable energy sources that we’ve built. Maiden is completely coal free. It is 100 percent renewable, zero percent coal.”

Broderick says Apple is already building for the future, with a second solar array underway at Maiden, with fuel cells also being doubled up. Also, 75 percent of energy needs at Apple’s corporate offices worldwide are met with renewable energy, he notes, which is double the increase compared to the past year. 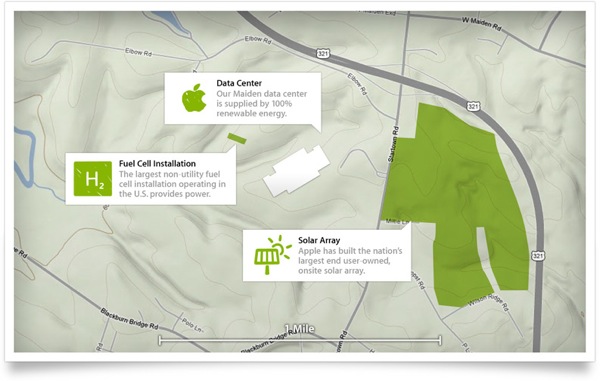 Apple detailed its Maiden data centre solar array plans in early 2012, which are now the “nation’s largest end user-owned onsite solar array.” The company has formerly been criticized by Greenpeace regarding the ‘dirty energy’ of iCloud, but with these latest report it should silence any further criticism over its energy plans. Apple continues to be more transparent than any other tech company we’ve seen, and these renewable energy plans are nothing short of impressive.