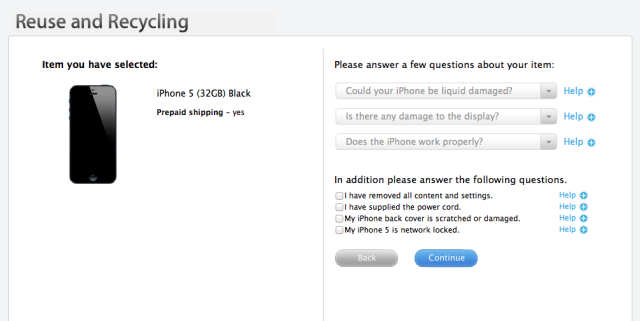 Apple’s Reuse and Recycling Program launched in the US back in August, and every sign pointed to a European release shortly afterwards. Today, Apple has launched its in-store iPhone trade-in program in the UK.

An online version of the trade-in program has been available for years, but those who wanted to upgrade had to visit the Apple website, share some information about the device (iPhone, iPad, Mac) and send in the device in a pre-paid shipping envelope, with the monetary value of the device reaching the owner’s preferred bank account shortly afterwards.

Pocket-Lint noticed, however, that Apple has extended the iPhone trade-in program to stores. So, if you are reading us from the UK, and you are after upgrading to the latest and greatest iPhone model, you should head towards an Apple store.

Apple has released the following statement:

“iPhones hold great value. So, Apple Retail Stores in the UK are launching a new program to assist customers who wish to bring in their previous-generation iPhone for reuse or recycling. In addition to helping support the environment, customers will be able to receive a credit for their returned phone that they can use toward the purchase of a new iPhone.”

The online version of the Reuse and Recycle Program is currently live in Europe in: France, Germany, Italy, Spain, Denmark, Ireland, Luxembourg, The Netherlands, Norway, Sweden.

Microsoft has revealed the first wave of Xbox Game Pass titles arriving on the service throughout October 2022. Kicking off the month, many of the games capture the spirit of the spooky season, leading into Halloween. This month, Xbox Game Pass subscribers can gain access to brand new titles available day and date such as...
Steve Vegvari
46 mins ago