The mask-wearing emoji was arguably the least-known emoji of the emotion-depicting emojis. That was, until the COVID-19 pandemic hit in full force early 2020. The emoji — for obvious reasons — suddenly saw a resurgence as COVID-19 spread globally, becoming one of the most popular emojis used in tweets pertaining to the pandemic.

The mask-wearing emoji admittedly looks a little sick. And that’s for good reason, since wearing masks wasn’t common practice outside places like Japan (where this emoji actually originates from) and other parts of Asia before the pandemic struck. Wearing masks has now become something positive — a way to keep yourself healthy (and happy). This is also likely the reason why Apple decided to make this change. 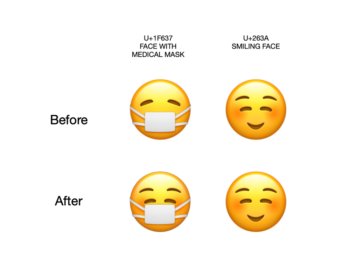 Companies coming up with their own iterations of emoji certainly isn’t something new, so this does not come as much of a surprise. However, whether other companies will follow suit and make the same change to better match Apple’s updated emoji set, as they have done repeatedly in the past, remains to be seen.

The new mask-wearing emoji will be available in iOS 14.2, along with a number of other new emojis like the baby-feeding emoji. Thank you 2020, the year that just keeps on giving.