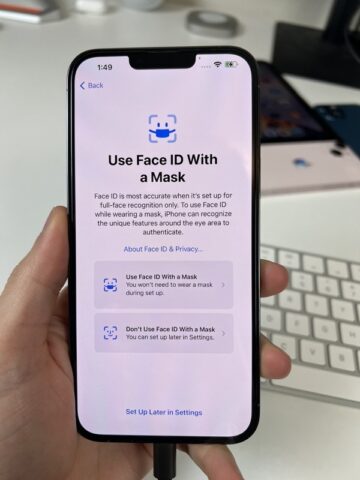 With yesterday’s release of iOS 15.4 beta for iPhone, Apple unveiled a new ‘Use Face ID with a Mask’ feature, that allows for its smartphone to be unlocked without the need for an Apple Watch.

The feature will leverage Face ID to “recognize the unique features around the eye to authenticate” iPhone owners, without the need for an Apple Watch.

Now there’s a caveat for this new feature, however. According to 9to5Mac’s tests, the ‘Use Face ID with a Mask’ feature only works with an iPhone 12 or newer. So that means the following phones will support the feature:

…and the following older iPhone models will not support the feature as of writing:

It’s unclear why this is the case—you’d think Face ID would be able to work as normal to detect areas around a user’s eyes, even on older iPhones. Maybe more processing power is required? Who knows. It could be just another case of ‘Apple being Apple’ and limiting new features to the latest devices, as that may push older iPhone owners to upgrade (well that’s what conspiracy theorists might say).

Here’s a demo of the feature shared today by MacRumors: