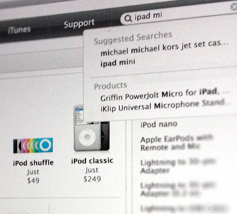 In the land of Apple-related rumours, particularly those that lead up to a known-product launch, there is another entry: it seems that shoppers in Apple’s online store were able to produce an iPad Mini reference as a ‘suggested search’ (though it looks as if this teaser has now been removed since it was discovered), as noted by iMore.

Hints of this type have proven to be accurate in the past, with references noticed ahead of time for products like the iPhone 5.

So is it proof of something? Does it mean anything? We should find out for certain on October 23, but all signs point to yes. Without knowing how their search functionality is designed, it is difficult to say for certain what makes these kinds of hints appear–for all we know it’s based on the most-common and most-recent searches done by the general public and not actually indicative of anything internal to Apple at all.

The latter of which may be the most accurate when it was also reported that the ‘iPad little’ is a suggested search which is a term that it is difficult to imagine Apple using in any official capacity.

What do you think it means? Is Apple just taunting us? Why do we always take the bait (and love it)?