While Apple unveiled an all new Apple TV at last week’s special event without announcing any streaming TV subscription service, analysts at J.P. Morgan are quite confident that the rumoured service is coming soon, and will cost around $40 a month at launch (via MarketWatch). Analyst Rod Hall believes that Apple could easily charge more or construct channel bundles to end up costing the average consumer more. 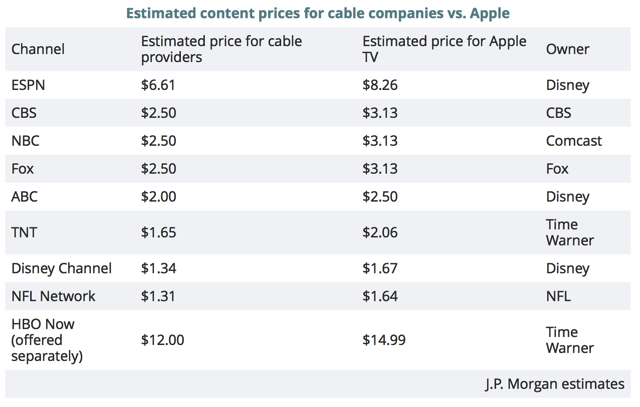 The above list by Hall predicts how pricing for some content providers could look on Apple TV. The list includes 27 cable networks including Viacom, Comedy Central and AMC Networks, and is based on pricing of Dish Network’s Sling TV. By adding broadcast content, the analyst believes people would want to completely cut the cord on their cable service. “The 25% markup for Apple is simply an assumption”, Hall said.

“We believe our estimates are only a ballpark given the myriad possible TV package options and markups that Apple could encounter. We assume that Apple will pay a 25% markup to content owners over what they normally get from cable providers such as Comcast though this is only our best guess,” Hall wrote.

J.P. Morgan notes that a TV streaming service could add another 1.3% to Apple’s earnings.