If you’re and iPhone users, odds are the majority of your most-used apps were made by Apple.

A new Facebook-funded study from Comscore (via The Verge) found that the large majority of the most popular apps used by iPhone and Android users come preinstalled by either Apple or Google.

Comscore explains that it used data it regularly gathers from apps and websites alongside a survey of roughly 4,000 people asking about the default apps they used during the month of November.

According to the study, as many as 75 percent of the top 20 apps (including the top four) available for iOS are made by Apple. Similarly, the study claims that Google owns 12 of the top 20 most-used Android apps. 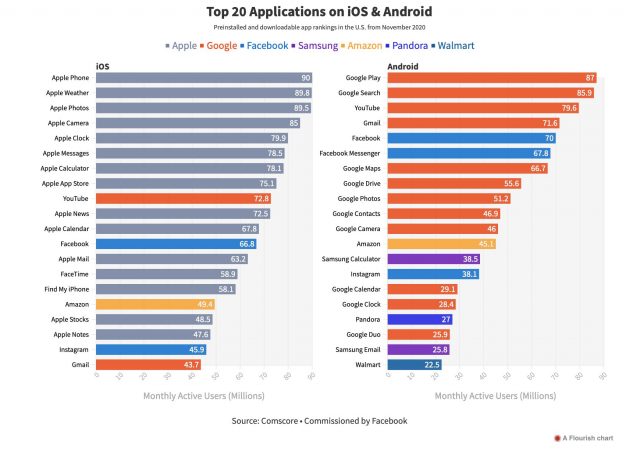 Facebook — one of Apple’s loudest critics — paid for the research so it could show the “impact of preinstalled apps on the competitive app ecosystem,” Comscore explained.

Apple rejected the report’s findings, and a spokesperson released a statement: “This Facebook-financed survey from December 2020 was narrowly tailored to give the false impression that there’s little competition on the App Store. In truth, third-party apps compete with Apple’s apps across every category and enjoy large scale success.”

Apple is seeing pressure from legislators in the US and Europe about its pre-installed apps, as Russia forced Apple to offer third-party apps on setup earlier this spring.

HBO has made the decision to premiere the fifth episode of The Last of Us on Friday, February 10th to avoid overlap with Super Bowl LVII. For us in Canada, this means fans will be able to check out the upcoming episode on Crave a few days early. HBO's The Last of Us has been...
Steve Vegvari
55 mins ago