Remember in the Terminator movie, when the T100 scanned his environment, and he was able to identify his surroundings? I remember thinking, “I can’t wait for the future, ’cause it looks awesome!”. Well, it seems we are getting close to this future. I don’t just mean SkyNet becoming self -aware and killing us all; I’m talking about augmented reality apps slowly making their way into the App Store. A few months ago, we heard and read some inklings of these “augmented reality” apps, being developed for iPhone OS 3.1. Well, now that 3.1 is out, we’re starting to see some of these apps make their way to the App Store and Cydia.

So what exactly is “augmented reality“? Basically, it’s the view from your camera app, combined with other apps/visuals/services to augment the reality of what’s really going on. Did that even make sense? Let’s just go over a few apps that are available now, and what’s coming up.

“Bionic Eye“, from Presselite, was just released last week, in the App Store.Â This app allows users to visualize point of interest on their iPhone 3GS camera, using GPS, the compass, and the accelerometer.Â You just point your iPhone 3GS camera at your surroundings, and the Bionic Eye app displays points of interest around you. The POI database inclues restaurants, Wi-Fi hotspots, subway stations, and more. Currently the app only works for Subway stations in New York, Washington, and Chicago. There are versions for the UK, France, and Tokyo, as well. For full functionality, you need an iPhone 3GS, on firmware 3.1. It is only $.99, in the iTunes App Store.

Another cool AR app out now is “Dishpointer Augmented Reality“. Using the camera, compass, and accelerometer, you can point your iPhone 3GS to the sky, and see where the satelites are, and allign your dish accordingly. It gives you a line of trajectory through the sky and where the satelites fall on the line, with their degrees. This one is available in the Canadian iTunes App store, for $9.99, and there is a pro version for $19.99.

These AR apps, are even starting to show up in Cydia. “SplatCam” was released last week, in the ModMyi repository. It is not as involved as the others, but it looks fun. Basically, it gives you a slingshot in you camera view, and you can sling stuff at whatever’s in your view. It is $2.99, in Cydia. 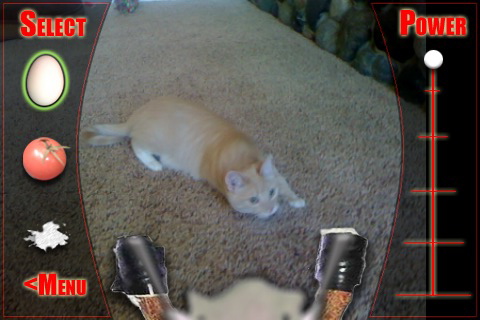 I think the best AR app I’ve seen out there, isnt even available on the iPhone yet. It is an app called “Layar Reality Browser“. It is currently only available on Andriod devices, but it is expected to make it’s way to the iPhone 3GS. It is similar to “Bionic Eye”, but has lots more info. Here’s a quote from their website:

“On top of the camera image (displaying reality) Layar adds content layers. Layers are the equivalent of webpages in normal browsers. Just like there are thousands of websites there will be thousands of layers. One can easily switch between layers by selecting another via the menu button, pressing the logobar or by swiping your finger across the screen.”

They are adding 3D functionality, via an update in November. Maybe this is when we’ll see an iPhone version?

Exciting stuff to come for the iPhone 3GS. Yet another reason to upgrade! That’s it for this week. If you want, you can read my blog, Green Candy, and you can follow me on Twitter: @rorypiper.