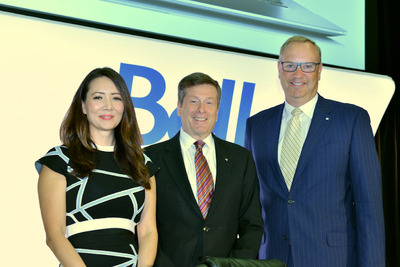 According to a new announcement from Bell Canada, the telecommunications company will introduce a new internet service called Gigabit Fibe to 1.1 million Toronto homes and businesses this summer.

George Cope, president and CEO of Bell Canada, said that the product would bring widespread access, innovation, and economic benefits to the city. In a statement, Cope said:

“Gigabit Fibe is a revolutionary broadband communications service that puts Toronto out front as a world-class Smart City. Network leadership has been the bedrock of Bell’s rapid transformation in recent years. Our existing high-speed fibre network is already driving fast Fibe TV and broadband Internet growth, and Canada’s largest 4G LTE wireless network is supporting tremendous increases in smartphones and mobile data usage. Gigabit Fibe is key to accelerating Bell’s leadership in home and business Internet services, and to supporting widespread access, innovation and economic benefits for Canadians into the future.”

Bell will begin by installing the service in an initial 50,000 locations in the city. The company estimates that the investment will cost around $1.14 billion, calling it the country’s biggest gigabit infrastructure project. The project will also create an additional 2,400 jobs in Toronto, which is something that caught the attention of Mayor John Tory, who said:

“As we plan for the future, we need to invest in our city and put in place the infrastructure required to keep Toronto competitive. The rollout of Gigabit Fibe is a testament to Bell’s commitment to investing in Toronto. This is Canada’s largest gigabit Internet infrastructure project, creating 2,400 jobs for our city. I’d like to thank Bell Canada for investing in Toronto and delivering services that meet the needs of today and the future.”

The gigabit service will bring internet speeds to a maximum of 940Mbps (megabits per second), up from the 175Mbps that Bell currently offers. Keep in mind that any internet speed advertised by a cable company is a theoretical maximum. The actual speeds you will received are going to be lower, however, it will still be a large improvement over the services currently offered.

The company is promising that other cities in Ontario, Quebec, and Atlantic Canada will be getting the service in the future. Bell is trying to offer the equivalent of what Google Fibre offers in the United States.