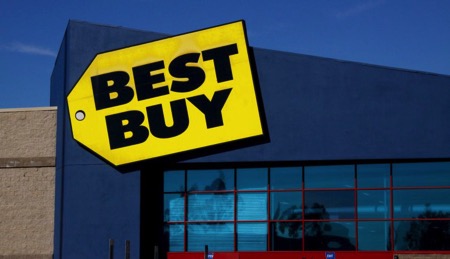 Best Buy started selling the Apple Watch earlier this month, with sales beginning in the U.S. on August 7th and in Canada on August 14th, both online and at retail locations. Today, Best Buy CEO Hubert Joly has announced that the Apple Watch is off to a great start, and that the company is working to deepen Apple’s presence in its stores. “Demand for Apple Watch has been so strong in the stores and online,” Joly told the Wall Street analysts in a conference call (via Fortune).

“The largest U.S. electronics retailer reported a rise in domestic comparable sales of 3.8% for the second quarter, well ahead of Wall Street’s expectations, and posted a better than expected profit. While Best Buy has helped its cause by cutting costs and adding floor space to growing categories like smart homes, home theaters, and shops-within-a-shop for top brands, it has also been getting a lot of help from Apple and its roster of red-hot products”.

Joly added that Best Buy is hoping to sell the device at all of its 1,050 big-box stores by the end of September, though initially they had planned to have watches in 300 stores by the holiday season. He further announced steps that will deepen Best Buy’s relationship with Apple, highlighting that the retailer is currently updating its Apple shop-in-shops at 740 stores, including new fixtures and more display tables for phones, computers, and tablets.

Joly also said that Best Buy will also start selling AppleCare and support this quarter (as rumoured), and will start testing out being an authorized service provider at 50 retail locations.

Currently, there are over 70 Best Buy Canada locations nationwide. Apple Canada announced last month over 50 of these stores would sell Apple Watch in time for the holidays.

The Roku Channel has shared its list of free movies and TV shows hitting the ad-powered streaming service in Canada for October 2022. Check out the full list below Movies The Death and Life of John F Donovan The Intruders Mama Rhymes for Young Ghouls Wolves The Woman In Black Alaskan Nets The Delinquent Season […]
Gary Ng
22 seconds ago