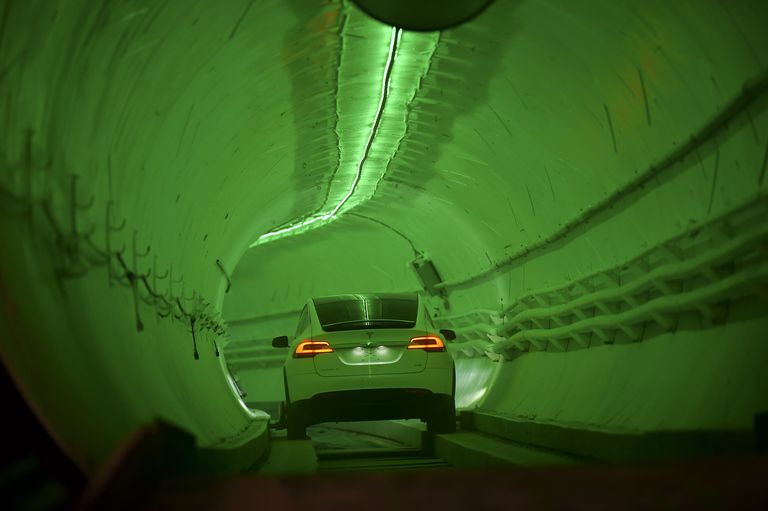 According to a new report from CNBC, Elon Musk last evening drove a Tesla through his Boring Company’s test tunnel in Los Angeles County, in the first public demonstration of what he hopes will form a congestion-beating new subterranean transport solution. The demonstration of The Boring Company’s Loop prototype system occurred on Tuesday 18 December 2018 in front of an audience of invited VIPs and journalists in Hawthorne, California.

Musk has slowly released information on the underground effort to the public on social media, but Tuesday marked a turning point as Boring’s underground vision officially surfaced.

The test track involves a 1.14-mile (1.83-kilometre) tunnel, with a platform at either end that lowers the car into the tube and lifts it out again, hurtling it along at speeds of up to 150 miles (241 kilometres) per hour in between.

The demonstration tunnel cost about $10 million USD to build. Cars would enter and exit the tunnels — a system he says is infinitely expandable by simply building more of them alongside one another — via elevators, which would act as a kind of station. To install these elevators, he said the company would drill a hole roughly the size of two parking spaces and install prefabricated lifts in sections. He did not mention the possibility of gridlock as cars queue to exit the tunnels.

“The purpose is to demonstrate that a lift can be built in very small footprints and within existing buildings, whether they are houses, office buildings, or retail parking lots,” Musk said. “Looking forward, one could have a lift in the basement of every office building, allowing extremely efficient commutes.”

Shortly before Tuesday’s event, Musk tweeted an image of a Tesla Model X, on track, inside the tunnel, later clarifying that any autonomous electric vehicle, not just a Tesla, could use the system and that it would cost around $200 to $300 USD to install.

Tesla in @boringcompany tunnel with retractable wheel gear that turns a car into a rail-guided train & back again pic.twitter.com/3a6i0NoSmi

In Tuesday’s test, the employee-driven Model X reached speeds of 53 miles per hour, although it is intended to reach 150 miles per hour in the future.

“At that speed, it will feel like teleporting within a city,” Musk said at the demonstration.

In related news, a captivating new interactive 360º video shows what it looks like from a self-driving Tesla sedan’s point of view as it navigates a winding road.

December 1st marks World AIDS Day and Apple is continuing to support Global Fund in its worldwide fight to stop AIDS. In doing so, Apple Stores around the world are promoting (PRODUCT)RED displays and products. Additionally, Apple is promoting apps, videos, and other materials on its products to help increase visibility. Since 2006, Apple has...
Steve Vegvari
14 mins ago