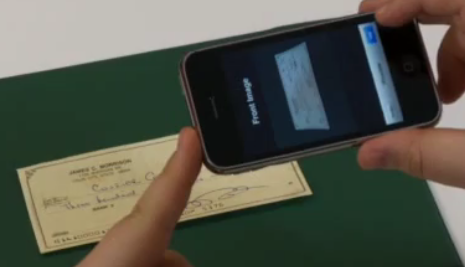 It appears Canadians will soon be able to deposit cheques from your smartphone camera, also known as photo chequing. The latest report from The Globe and Mail notes our ‘Big Six’ banks (CIBC, TD, RBC, Scotiabank, BMO, National Bank of Canada) have plans to introduce this new feature in Canada, according to NCR, the company behind the technology:

“They’re all working on plans right now,” said Steven Nogalo, vice-president of Global Payments at NCR in Waterloo, Ont., the Canadian-based company that created the technology, which is used by U.S. banks such as JPMorgan Chase & Co., Citigroup, and Bank of America.

With the arrival of updated federal legislation this year that will allow more modern kinds of digital payments in Canada, the technology is expected to make its debut at Canadian banks within months. Most of the Big Six lenders are expecting to roll out photo chequing by the end of summer or soon after.

“There is going to be a race among the Canadian financial institutions to get to market first,” Mr. Nogalo said.

The technology behind this is NCR’s APTRA Passport for Mobile, which will allow users to take pictures of cheques and deposit them safely. Security features would include:

Essentially, once information from a cheque is received it is entered into a massive online database. Duplication of any information would quickly raise a red flag. In April of 2009, NCR teamed used Mitek’s ImageNet Mobile Deposit software technology for image processing–there’s no word if this will also be used in Canada.

Check out a video demo below (it’s an older video but the steps will be the similar):

Depositing cheques via a snap from your smartphone has turned into a popular feature in the U.S.; Chase Bank in New York has had more than $3 billion U.S. cashed since July 2010.

CIBC was the first bank to launch a fully-featured iPhone app to allow customers to pay bills, check balances, transfer funds, and more back in February of 2010. Soon after we saw similar apps from TD, RBC, Scotiabank, and BMO. The race is now on to see which bank will be the first to update their iPhone app to include photo chequing. This is one more reason to never wait in line at the teller window again or use an ATM. Are you excited for photo chequing to come to Canada?