Back in November, Tesla announced its Supercharger network would no longer be free for cars ordered after January 15, 2017. Tesla Model X and Model S cars ordered after this date—including the upcoming Model 3—will instead get 400 kWh (kilowatt-hour) of free credits at Supercharging stations, equivalent to about 1,000 miles (1600 km), explains the company in a new blog post.

Below is the Supercharger Network pricing chart for Canada, detailed by province (Alberta, BC, Ontario, Quebec and Nova Scotia have Tesla Superchargers), with per minute pricing for tier 1 and tier 2; prices below include taxes and fees: 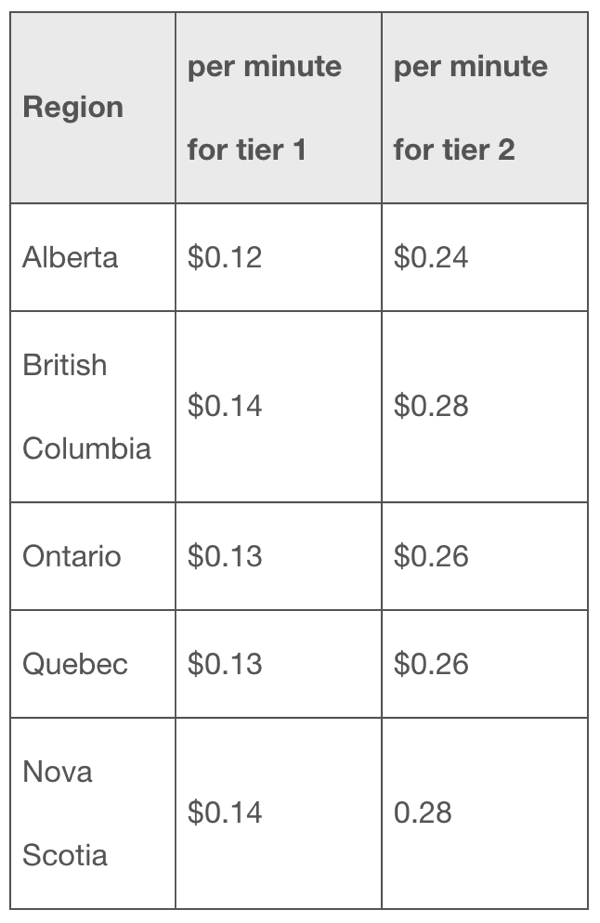 Tier 1 charging prices apply when your Tesla is charging at or below 60kW, with pricing at half the cost of Tier 2. If your car is sharing a Supercharger with another car, Tier 1 applies every time. For Tier 2, that is when your car is charging above 60 kW.

New Model S and X cars going over their complimentary annual credits will incur a “small fee”. Tesla says they try to bill per kWh where possible, but in other areas (such as Canada), they bill by the minute. Tesla says 400 kWh credits do not roll over and reset on the anniversary date of your vehicle’s purchase.

For vehicles parked at a Supercharger once they’re done charging, a $0.40 per minute idle fee will apply.

Last November, Tesla clarified their “Supercharger Network will never be a profit center,” so the move is not where they are aiming to make money off their customers. They note “Supercharging is offered to our customers below the price that it costs us to provide the service.”

Tesla says charging for the Supercharger network will allow them to “reinvest in the network, accelerate its growth, relieve congestion, and bring all Tesla owners, current and Model 3, the best Supercharging experience.”

On a side note, earlier today Tesla founder Elon Musk tweeted an upcoming Ludicrous Easter egg could push the Model S P100D to 0 to 60 mph in 2.34 seconds (using Motor Trend test criteria), as the feat “might be achievable,” he says. The tweet seemingly throws a jab at Faraday Future, which claimed early speed tests of 0 to 60 mph at 2.39 seconds for their FF91 electric car.

Promising early results from the Ludricrous Easter egg. Looks like 0 to 60 mph in 2.34 sec (Motor Trend spec) might be achievable…

The latest video from Mrwhosetheboss reveals some Samsung smartphones are suffering from a swollen battery issue. Samsung dealt with a Galaxy Note 7 fiasco in 2016, when batteries for the smartphone were catching fire worldwide. Now, it appears some older Samsung phones are seeing batteries swell up, even when off and in storage. The tech […]
Gary Ng
51 mins ago