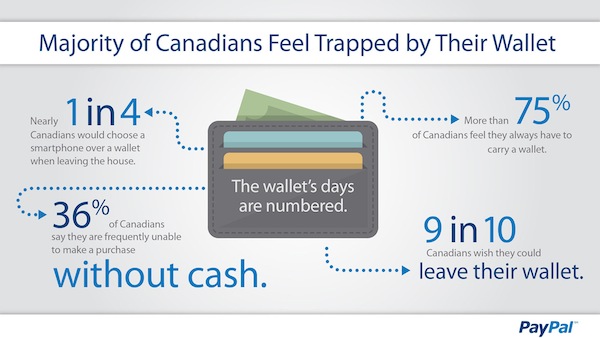 The future of the wallet isn’t bright, at least according to PayPal’s recently published survey. According to their research, the majority of Canadians aspire to a wallet-free lifestyle. They are followed by other countries like Australia, Germany and the UK.

Nine out of ten Canadians (87%) would leave their wallets at home, and nearly one in four (23%) of the surveyed Canadians aged 18-24 would opt for a mobile payment method instead of a wallet.

Although this number bears great significance for Canadian mobile payment processors, there appears to be a discrepancy between consumer demand and reality. Some 75% of Canadians have reportedly been unable to pay for something due to lack of cash, with the same young age group (18-24) facing the above situation frequently, despite some obvious efforts coming from the mobile industry to meet this demand. As we previously reported Bell and RBC teamed up to provide their own secure mobile payments solution which is currently limited to Bell Mobility smartphones.

But the PayPal survey isn’t limited to Canada. ‘Consumer frustration’ is spread across the globe apparently, based on surveys conducted in Australia, Canada, Germany, the US and the UK.

With summer vacations just around the corner, Canadians apparently have big plans, but taking their wallet isn’t included–at least at the beach. As the survey points out, they don’t wish to take their wallet to a bar, laundromat, grocery store or restaurant as well.

What about you? Would you switch to a digital wallet?