The Apple Watch has made its first U.S. magazine debut as supermodel Candice Swanepoel has appeared on the March cover of SELF (via AppleInsider).

The magazine gets the Apple Watch exclusive and the following paragraph clearly describes you will require an iPhone to power the wearable to get a summary of your daily activity:

Aside from all the overall productivity the device offers, we’re zeroing in on the health aspects: Using an accelermeter, a built-in heart rate sensor, GPS and WiFi from your iPhone to provide a comprehensive picture of your daily activity; consequently, measures three separate aspects of movement: calories burned, brisk activity and how often you stand up during the day.

Considering Swanepoel’s athletic prowess, it was an ideal accessory for her sporty cover shoot. She told SELF, “I’m an athlete. I use every single muscle, especially my core and arms, when I pose. It’s so important for me to feel strong!” 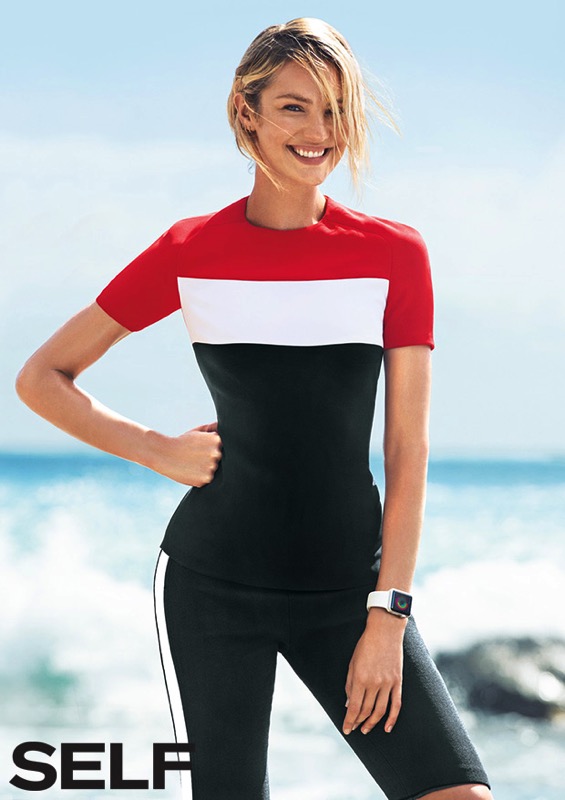 Swanepoel, seen above, looks to be sporting the Apple Watch Sport Edition in white. Is that the 42mm watch face size she’s wearing? Maybe Apple is trying to showcase how the larger model looks on women versus the 38mm version.

Check out the behind-the-scenes video below: