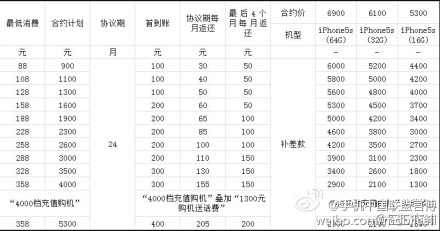 The longly rumoured Apple-China Mobile deal was finally confirmed by the Wall Street Journal yesterday. The long-term agreement comes right after the Chinese Ministry of Industry and Information Technology’s (MIIT) gave 4G licenses to the world’s biggest wireless carrier and other smaller wireless players. The deal was awaited by analysts and investors, as they bet on high iPhone sales in the country. But how much will an iPhone cost for new or existent China Mobile subscribers?

Unwired View points to China Mobile Alliance’s Weibo account, which published the iPhone 5s subsidy rates. As it turns out, the handset will be heavily subsidized: China Mobile subscribers will be able to purchase an iPhone 5s for roughly $213 (¥1300) if they opt for the most expensive monthly plan costing $59 (¥358), which obviously includes a long-term contract. If they don’t want to shell out that amount on a monthly basis, there is the $15 monthly plan, but in this case the iPhone 5s’ price goes up to $722 (¥4400). subsidized.

China Mobile already has 42 million iPhone customers. The iPhone probably will be launched with the company’s December 18 event. From Gene Munster’s perspective, Apple could sell about 17 million iPhones next year, which would add 5% to Wall Street’s revenue estimates.

Apple today announced the winner of its inaugural Apple Podcasts Award for Show of the Year. The honour went to Slate Magazine's critically acclaimed narrative history series, Slow Burn, for its latest season, which covers Roe v. Wade. Published throughout June 2022, the four-episode season explores the events leading up to the landmark 1973 Supreme Court...
Nehal Malik
47 mins ago