What they have found is that Apple’s new A9 processor (APL0898) measures approximately 8.7 × 10.7 mm, or about 94 mm2, which means an 80% linear shrink, which is in line with their guesstimate based on the images they saw during the “Hey Siri” media event. Also, the chip seems to have 8 MB of cache (up from 4 MB found in the iPhone 6), and the chip that powers the device bought by Chipworks was made by Samsung.

Maybe that’s a reflection of the 14/16 nm processes only shrinking the transistor dimensions, not the metallization, maybe it means that Apple have crammed more in there (probably both). And it seems to confirm our postulated 8MB of L3 cache. 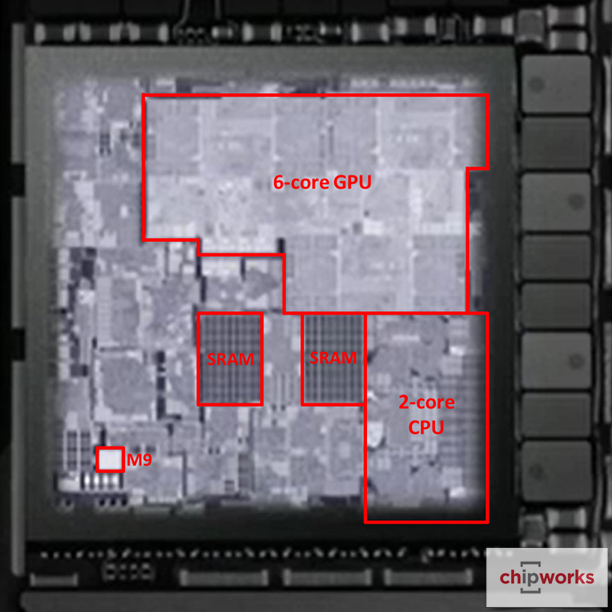 Chipworks also notes that Apple maintained the dual-sourcing of its components: the 2 GB of RAM was supplied by Micron (iFixit had Samsung), and the flash, by Hynix (iFixit had Toshiba).

When it comes to sensors, Apple worked with Invensense and Bosch to obtain motion sensors, and Goertek and AAC again for the microphone slots.
This is just the tip of the iceberg. As usual, Chipworks plans to perform a complete analysis of the iPhone 6s and 6s Plus components, with chips having high priority. We can expect more information about the chips and 3D Touch screen next week.