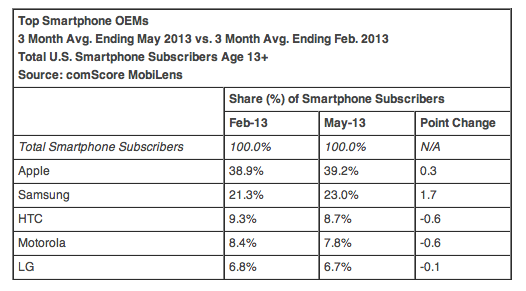 Apple maintains its lead among smartphone manufacturers in the growing U.S. smartphone market, according to the most recent study released by comScore.

Looking back at the past three months, the market research firm is indicating Apple is the top smartphone manufacturer, retaining 39% of OEM [original equipment manufacturer] market share among the 141 million U.S. smartphone users. Google’s Android maintained its position as the No. 1 mobile platform.

Apple and Samsung were the only smartphone manufacturers showing growth during the three-month period ending May 2013. Apple grew 0.3% to 39.2%, while Samsung has posted an incredible 1.7% growth and retains 23% of the U.S. smartphone market. 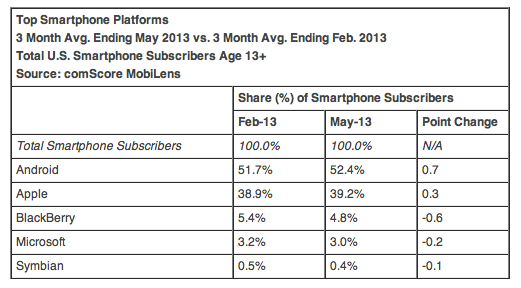 The picture looks slightly different with the top smartphone platforms: Android has grown 0.7% since February and now retains 52.4% of the U.S. market. Apple obviously ranks second with the aforementioned 39.2%, while BlackBerry, Microsoft and Symbian are losing ground.