Apple continues to top the US smartphone market with 40.6% of OEM market share in September, 0.1% down compared to a month prior, according to comScore’s most recent report. Google’s Android maintained its position as the #1 smartphone OS with 51.8% of market share in the country. 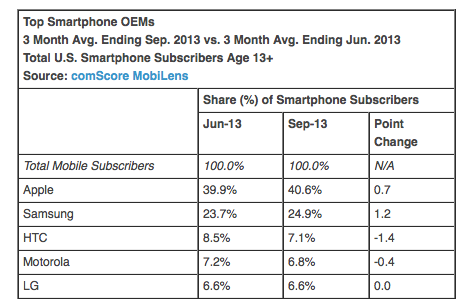 Smartphone market penetration currently stands at 62% in the US, up from 60.8% recorded a month prior, as 147.9 million people in the country own a smartphone. By comparison Canada has reached 62% of smartphone adoption rate by the end of 2012.

In the race for smartphone market share Apple has maintained its #1 position by retaining 40.6% of market share. The Cupertino-based smartphone OEM was seconded by Samsung with 24.9% while HTC ranked third. 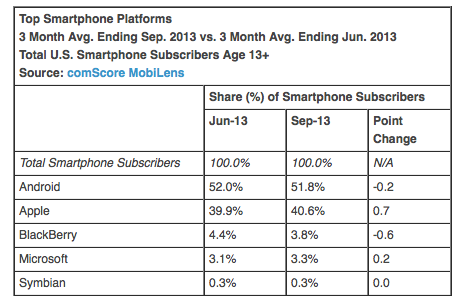 In terms of smartphone OS, Android is still the king of the market with 51.8% share, while Apple maintained a strong second position with 40.6%. BlackBerry retained 3.8% of market share, while Microsoft has grown 0.2% compared to June 2013, as it now accounts for 3.3% of the US smartphone OS market.