With the release of iOS 14, Apple has complete redesigned the widgets which not only give useful information at a glance, but can also be placed anywhere on the Home Screen pages.

Users can pin the widgets in different sizes on any Home Screen page and even create a Smart Stack of widgets, which uses on-device intelligence to surface the right widget based on time, location, and activity. Widgets can be customized by app developers for work, travel, sports, entertainment, and other areas of interest. 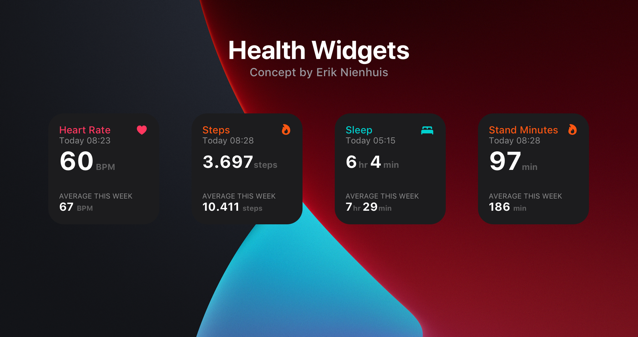 Concept designer Erik Nijenhuis has just up come with a neat idea imagining ‘Health Widgets’ for iOS 14. As shown in the image above, there are dedicated widgets for Heart Rate, Steps, Sleep, and Stand Minutes.

“Concept idea for some Health widgets. I hope Apple can add these to iOS. There are a lot of possibilities with this design for example the big widget with a graph. I hope you like it!”

Yesterday, Apple released iOS 14 and iPadOS 14 Public Beta, allowing everyone to test out its newest mobile software for iPhone and iPad, including the all-new Home Screen with widgets.

Let us know what you think of the Health Widgets concept in the comments section below.