The Canadian Radio-television and Telecommunications Commission (CRTC) has announced today that it is watching closely how the TV market evolves, and that it has set out “best practices” for TV service providers as the December 1 deadline approaches. Starting on that date, TV service providers will have to offer both pick-and-pay and small packages. 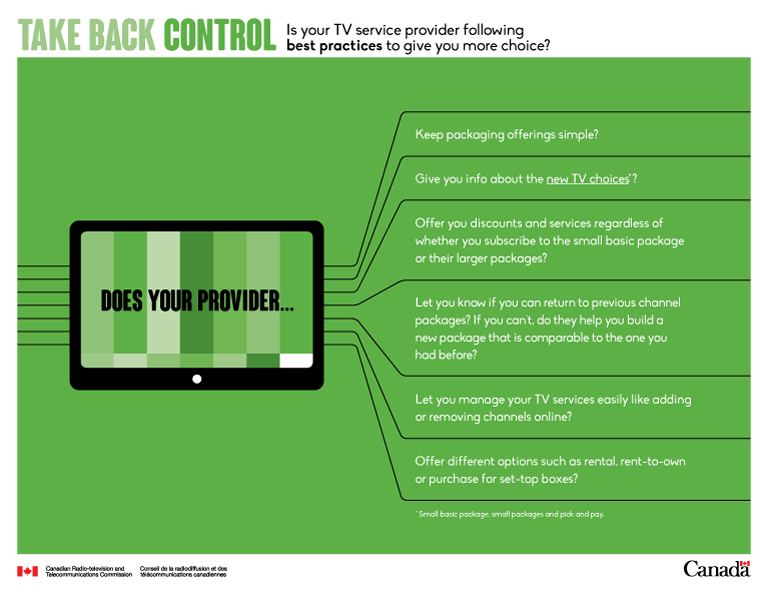 According to best practices set out today by the regulator, service providers will need to provide information to customers about the new options they will have starting next month, keep offerings simple and transparent, offer deals and discounts regardless of the entry-level package selected, and more.

Also, instead of the usual seven years, most TV service providers’ licences will be renewed for one year, the CRTC has announced today, enabling the regulator to keep an eye on the practices of these companies.

You may recall that the controversial “skinny” basic TV option was introduced on March 1 this year, meaning that Canadians can have cable TV for as low as $25 per month. Also, TV service providers must offer channels either individually or in packages of up to 10 channels. Starting next month, they need to offer both.

“In the CRTC’s decision, the commission recognizes some of the concerns and complaints that it’s received,” says Lawyer Alysia Lau with the Public Interest Advocacy Centre, a consumer protection group. “Some of the things that they talked about, were, if you offer a bundling discount then it should be offered to everyone who subscribes to more than one service for instance, if a customer wants to switch to a lower price package, they shouldn’t be penalized for doing so, you probably shouldn’t remove any services such as [Video on Demand] or free previews from skinny basic customers just because they want to subscribe to skinny basic, and you should try to make the offering of your packages simple.”

One thing is important to mention regarding the basic TV packages and options Canadians will be able to choose from: the regulator never promised to lower cable bills, only to give more choice. So keep that in mind when signing the new contract with your TV service provider.