CurrentC to Deactivate All Beta Test Accounts This Month

Last month, Merchant Customer Exchange (MCX) announced that it would postpone a nationwide rollout of CurrentC, while also laying off half of its team and today, it has sent out an email titled “An Important Message from CurrentC” to all of its app’s early testers, saying that starting June 28, the company would end its beta test, Consumerist reports. 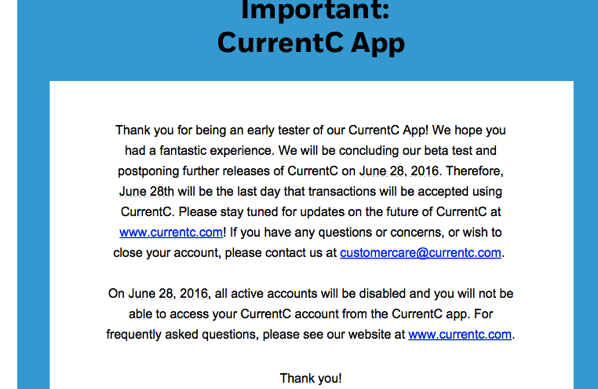 “We will be concluding our beta test and postponing further releases of CurrentC on June 28, 2016,” the email states. “Therefore, June 28th will be the last day that transactions will be accepted using CurrentC”, A similar message has now also been posted on the CurrentC website, along with an FAQ form with information about current users’ options. The company notes that all active accounts will be disabled and users will no longer be able access their accounts from the app once the tests conclude.

A spokesperson for the Merchant Customer Exchange (MCX), the consortium of retailers behind the system, tells Consumerist that the company has “not announced future timelines or plans around the app but we’re looking forward to analyzing and learning from the data we gleaned throughout the beta.” CurrentC seemed like a great idea to retailers in the Merchant Customer Exchange (MCX) consortium back in 2014. Stores that signed up initially included Walmart, Best Buy, CVS, and Rite Aid.

Many original CurrentC members, including Best Buy, now accept other forms of mobile payments including Apple Pay, while Walmart, the largest consortium member, has developed its own mobile payment app.