As noted by the folks over at MacRumors, the latest iOS 16.1 update brings live sports scores and other real-time activities to iPhone 14 Pro’s Dynamic Island.

For those who haven’t upgraded to iOS 16.1 yet, it introduces a new Live Activities feature that allows iPhone users to keep tabs on are happening in real-time, such as a sports game or a food delivery order, right from the Lock Screen.

So for instance, if you’re watching a Premier League match, the Dynamic Island will show a live-updating scoreboard with the number of goals scored by each club.

When long pressed, the Dynamic Island expands to show the time elapsed and play-by-play action. Take a look at the screenshot below. 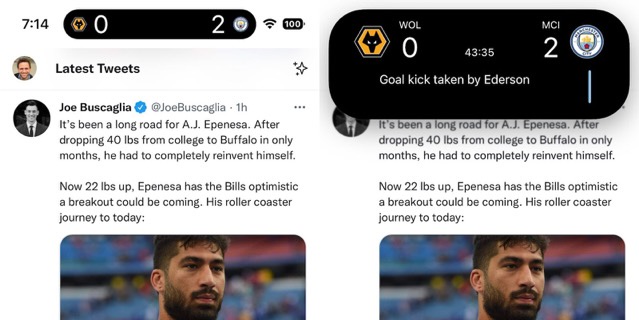 If your iPhone 14 Pro is locked, the score is shown in a widget on the Lock Screen instead.

To test the feature with an iPhone on the iOS 16.1 beta, open the TV app and tap on the “Follow” button for a supported game. At launch, Apple says the feature is available for MLB games for users in the U.S., Canada, Australia, U.K., Brazil, Mexico, Japan, and South Korea, in addition to NBA and Premier League games for users in the U.S. and Canada only. The feature will likely be expanded to other sports leagues in the future.

On iPhone models without the Dynamic Island, Live Activities are entirely limited to the Lock Screen.