Canada Considers Electronics Ban on Some Flights from Middle East, Like U.S.

The U.S. and British governments, citing unspecified threats, are barring passengers on some international flights from mostly Middle Eastern and North African countries from bringing laptops, tablets, electronic games and other devices on board in carry-on bags. 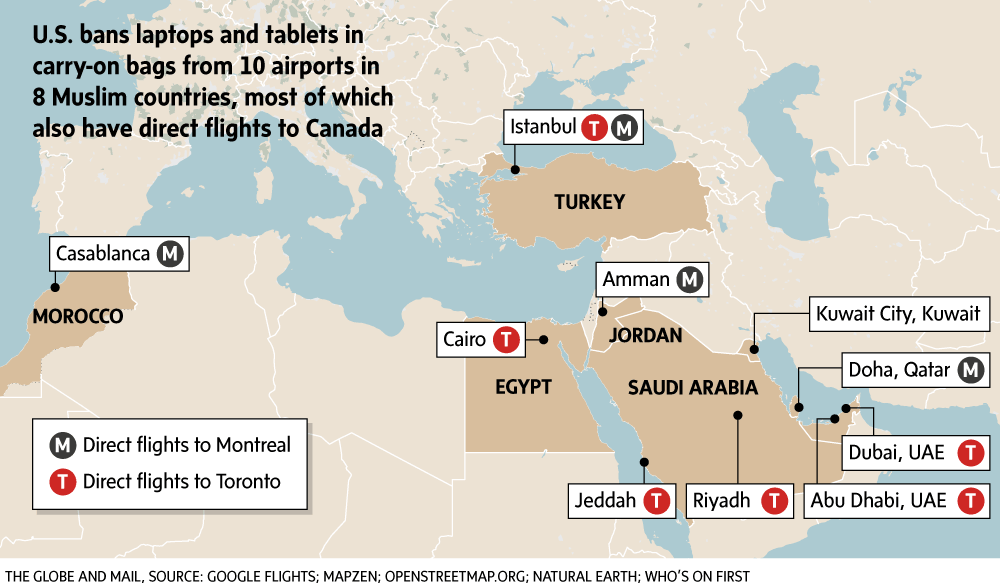 Passengers flying to the United States from 10 airports in eight countries will be allowed only cellphones and smartphones in the passenger cabins, senior Trump administration officials said. According to a new report from CNN, larger electronic items must be checked.

The electronics ban affects flights from international airports to the U.S. from in Amman, Jordan; Kuwait City, Kuwait; Cairo; Istanbul; Jeddah and Riyadh, Saudi Arabia; Casablanca, Morocco; Doha, Qatar; and Dubai and Abu Dhabi in the United Arab Emirates. About 50 flights a day, all on foreign carriers, will be affected. The officials said no U.S.-based airlines have nonstop flights from those cities to the United States.

The United States Department of Homeland Security adopted the ban Tuesday, which prohibits electronics larger than cellphones, such as laptops and tablets, in the cabins of planes from nine airlines with non-stop flights to the U.S. from 10 airports, mostly in the Middle East and North Africa.

Transport Minister Marc Garneau said that Canada is currently evaluating intelligence passed on from the United States, in order to determine if it should also require passengers on some flights from Middle Eastern countries to check all large electronic devices, besides mobile phones, reports The Globe and Mail. “There is not a specific timeline but we are acting expeditiously,” he said, following a regularly scheduled cabinet meeting on Parliament Hill.

The decision was prompted by “evaluated intelligence” about potential threats to airplanes bound for the United States. The officials would not discuss the timing of the intelligence or if any particular terror group is thought to be planning an attack.