Facebook has today introduced a bunch of great new features for Facebook Live, allowing users to discover, share, and interact with live video as well as personalize their live broadcasts. Furthermore, the ability to stream live video from an iPhone which debuted earlier this year as a US-only feature, is now also available in Canada and beyond. The update also brings the ability to go live in Facebook Groups and Facebook Events. 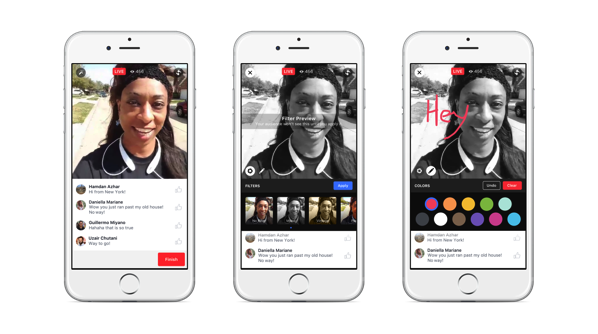 The new ‘Live in Groups’ feature allows users to broadcast to just the people in a Facebook Group. Similarly, ‘Live in Events’ allows you to go live from a birthday party to let those that can’t make it to join the fun. The all new ‘Live Reactions’ makes these live video feeds even more interactive and fun. Viewers can express their feelings in real time during a live broadcast using Live Reactions. Viewers can select Love, Haha, Wow, Sad or Angry, and the reactions animate right on top of the video.

We want people watching the broadcast after the fact to feel “in” on the action. To achieve this, we will replay comments as they happened during the live broadcast when people watch it later. We’ve also heard that people want more creative ways to personalize their live broadcasts. Today we’re starting with a set of five Live Filters, and coming soon we’ll add the ability to draw or doodle on your video while live.

People in more than 60 countries can now share live video, and we’ve been inspired by all the different global broadcasts. The Facebook Live Map gives you a window into what’s happening in the world right now.

To read more about why Facebook decided to add a slew of new features to its Live video as it takes on the likes of Snapchat and Periscope, check out this BuzzFeed article which also includes an exclusive interview with CEO Mark Zuckerberg.