Facebook Messenger has launched a new feature for iOS and Android users, called Instant Video, which essentially brings a video chat overlay into your conversations. 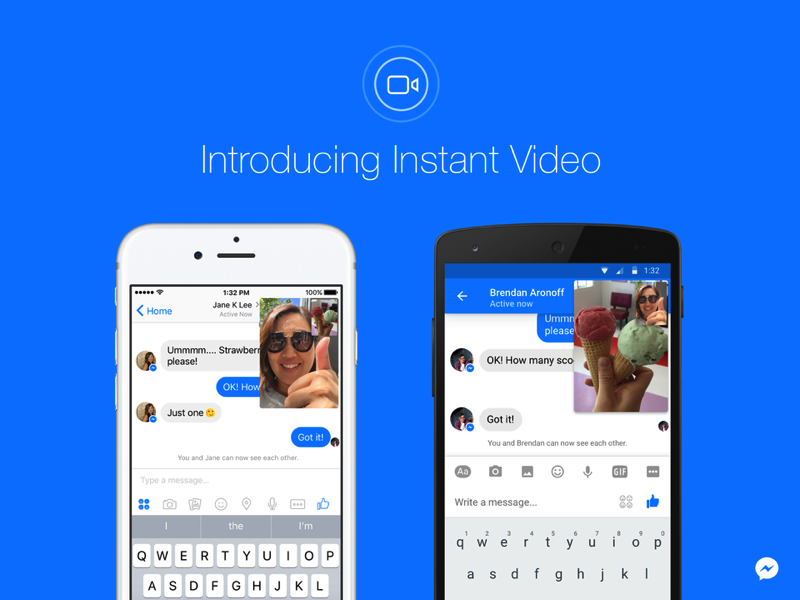 Facebook says the feature will allow you to share live video right within your chat—and sound will be muted by default—to “bring your conversations to life in the most authentic way.”

Here’s how it works: First make sure that both you and your friend have the latest version of Messenger for either iOS or Android. Then, while both of you are viewing an open Messenger conversation, tap on the video icon in the top right corner to start sharing real-time video. Audio is off by default because sometimes you just need to see something, not hear it — but sound can easily be turned on if you choose. Your video will float over the active text conversation that you can continue while viewing the video. Your friend can watch your video stream and share a video back if they decide.

The video button in the top right of Messenger will pulse when both parties are viewing the conversation, and tapping the icon will launch Instant video. The receiving party can opt to share video back, and you’ll get a mini picture-in-picture FaceTime-like video overlay.

Messenger launched video calling last year in Canada, but Instant Video is an extension of the feature.

Instant Video looks to be yet another clone of a Snapchat feature, as the latter has long had a similar feature for its users. Earlier this month, Facebook’s Instagram launched Stories, a feature borrowed straight from Snapchat. If you can’t beat ‘em, join ‘em right? Messenger has 1 billion monthly active users and clearly Facebook wants them to stick around.

Sounds like a cool feature, but I don’t know if I’ll be using it. For starters, I rarely use Messenger to have text conversations; secondly, I don’t need to share what I’m doing with video that desperately, when a Live Photo can do the job easily (honestly, do you really need to show video of ice cream flavours?!).

Click here to download Messenger for iOS in the App Store. We’re not seeing Instant Video live yet here, but let us know if it’s working for you.