Earlier this month Mozilla unveiled the Firefox browser (beta) for iOS, but the release was limited to those in New Zealand. 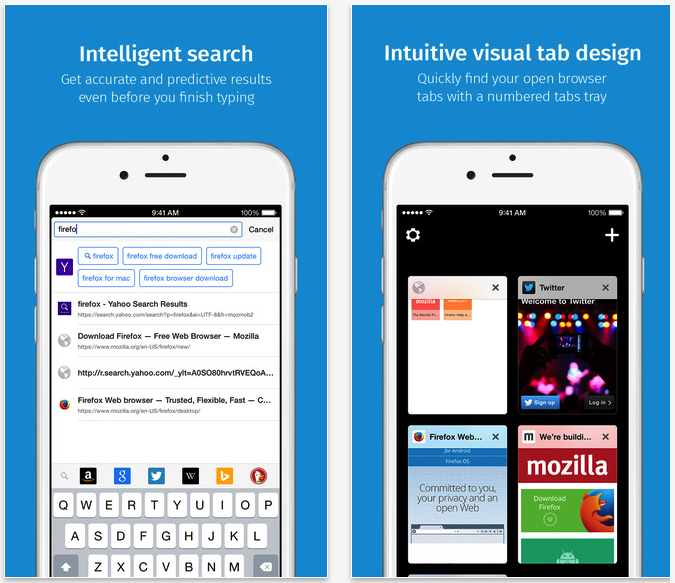 Today, the mobile web browser is available to all Canadians on the App Store. With the release of Firefox for iOS, Mozilla is looking to give mobile users an additional choice for their web browsing needs. However, this isn’t the first time Firefox has been available on mobile. Mozilla released their Firefox web browser for Android several years ago.

“Experience a fast, smart and personal Web. Firefox is the independent, people-first browser made by Mozilla, voted the Most Trusted Internet Company for Privacy. Hundreds of millions of people around the world use Firefox on desktop for a more personal browsing experience.”

Firefox brings numbered tabs to users, lists top visited sites, and provides intelligent search which gives users suggestions based on their previous browsing history. In addition, if you use the desktop version of Firefox, you will be able to sync your browser history, saved passwords, and active tabs with the mobile app.

Firefox for iOS is available as a free download from the App Store. The app requires any device running iOS 8.0 or later.

Tesla CEO Elon Musk looks to be giving up on terminating his $44 billion USD bid for social media giant Twitter, now proposing to go through with the acquisition on the original terms — reports Bloomberg. According to Bloomberg's sources, Musk proposed closing the deal for the original offer price of $54.20 USD per share...
Nehal Malik
20 mins ago

Google on Tuesday announced new product updates, and its latest includes the debut of the Nest Wifi Pro with Wi-Fi 6E support, the first router from the company that is triband mesh network ready. Wi-Fi 6E (E for Extended) leverages the new less-crowded 6 GHz radio band and offers speeds up to two-times faster than […]
Gary Ng
37 mins ago

Google today announced a major update for the Google Home app that brings a fresh new design, Matter integration, support for both Wear OS and the web, and plenty of new features. The company said it set out to reimagine Google Home because the number of average connected devices per user has gone up from...
Nehal Malik
59 mins ago