Wildfires in Fort McMurray have devastated entire neighbourhoods, swallowing up homes in minutes. James O’Reilly lost his home of nearly 20 years and watched on his iPhone as it started to burn down, via his Wi-Fi Canary security camera, still connected prior to the home being engulfed by flames. 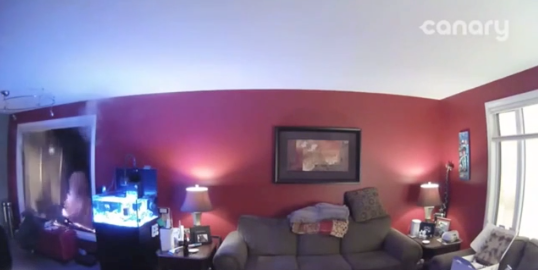 O’Reilly shared his story with Metro Edmonton, detailing how he and his wife barely had time to grab some clothes before abandoning their home. About 20 minutes after they left home, he watched his home catch on fire on his iPhone, as the Canary security camera showed his living room window explode from flames and eventually fill up with smoke.

Footage recorded by Canary cameras have the option of being automatically uploaded to cloud servers. O’Reilly watched his home burn down while at Gregoire Lake, in his truck, with his wife following behind in their other vehicle.

The following video below is a time-lapse of his original five-minute long video:

“We’ve been talking for two days about all the things we left behind,” he said. “We left pretty much all our important papers, some important pictures, we left a glass of Candace’s father who passed away.”

Evacuation orders were voluntary on Tuesday when O’Reilly and his wife were headed home, but by the time they arrived, they became mandatory, leaving only minutes to pack and leave.

Despite the abrupt orders to leave, O’Reilly says they’re thankful to police and firefighters who braved flames to help them safely evacuate. With their camper, he says they’re lucky to have a home on the road, compared to most.

Canadians making personal donations to the Canadian Red Cross to help relief efforts will see their contribution matched by Ottawa. You can make a easily make a text donation, while wireless carriers such as TELUS and Rogers are offering free calls/texts to the area.