Last year’s 16GB Samsung Galaxy S4 was found to only have 8.5GB useable onboard storage due to its operating system taking up the rest.

Now it turns out the latest 16GB Samsung Galaxy S5, announced today, suffers from the same problem but this time it’s worse, according to Android Central:

And what you can see is that on the 16GB model of the Galaxy S5, half of the on-board storage is used up before the owner even turns on the phone. It’s not quite as dire on the 32GB model of course (and remember that there’s a little bit of funky math anyway, and you never get as much storage as manufacturers say), and Samsung will quickly tell you that’s why you have the option to use a microSD card for expanded storage. 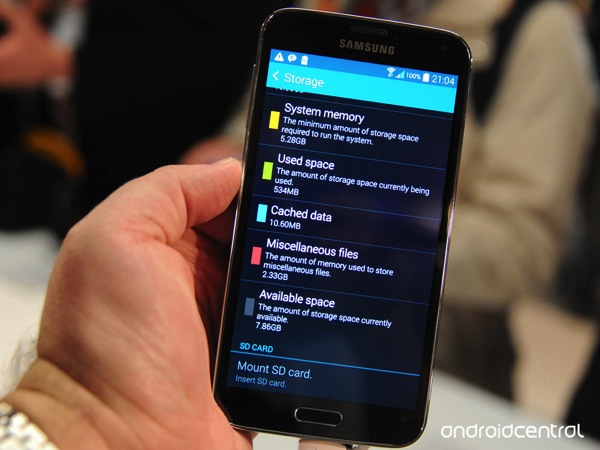 This time around there’s only 7.86GB of usable space on the 16GB Galaxy S5 (as shown from the press area demo unit above)—and that’s before carriers have had their chance to put on customizations, which could bring that number down further. Yes, you can insert an SD card for more storage, but really? To have more than half of the advertised storage used up by the operating system—isn’t that a bit much?

Samsung isn’t the worst culprit here when it comes to system bloat, but it reminds us of the 64GB Microsoft Surface Pro, which only comes with 23GB of usable storage.